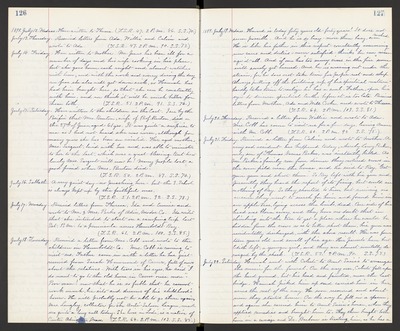 July 14. Friday. Have written to Mother. Mr. Jones has been ill for a number of days and his wife cooking in his place, but she goes home each night and almost watches with him, and with the work and worry during the day we fear she also will get down sick, so Hannah has had him brought here, so that she can be constantly with him, and we think it will be much better for them both. (T.S.R. 51. 2 P.M. 91. S.S. 76.)

July 15. Saturday. Have written to the children in the East. I see by the Pacific that Mrs. Benton, wife of Prof. Benton, died on the 27th of June, aged 61 yrs. It was quite a surprise to me as I had not heard she was worse, although for many years she has been an invalid. Her aged mother, Mrs. Sargent, lived with her and was able to minister to her to the last, which was a great blessing. But how lonely Mrs. Sargent will now be! Many people lost a good friend when Mrs. Benton died. (T.S.R. 50. 2 P.M. 87. S.S. 70.)

July 18. Tuesday. Received a letter from Mrs. Cobb and wrote to the children in Humboldt Co. Mrs. Cobb is coming to visit us. Father came in with a letter he has just received from Sarah Hammond of Carver, full of news about the relatives - With tears in his eyes, he said "I do want to go to the old home in Carver once more." Poor man! now that he is so feeble that he cannot work much, he sits and dreams of his childhood's home. He will probably not be able to go there again. Mrs. Langley, collector for the Anti - Saloon League, mark one quite a long call today. She lives in Lodi, is a native of Center Abington, Mass. (T.S.R. 64. 2 P.M. 103. S.S. 85.)

1899. July 19. Wednes. Howard is today forty years old - forty years! It does not seem possible. And he is so busy - more than busy, even rushed. He is like his father in this respect - constantly assuming new cares and duties - never satisfied - thinks he can manage it all. And if one has "too many irons in the fire some will surely get burned. And he is wearing out under the strain, for he does not take time for proper rest and sleep. Always putting off the building up of his spiritual nature - hardly takes time to realize he has a soul. Father, open his eyes to discern spiritual truths before it is too late. Received letters from Mother, Ada and Will Cooke, and wrote to Theresa. (T.S.R. 64. 2 P.M. 103. S.S. 81.)

July 21. Friday. Received a letter from Calvin and wrote to Mother. A very sad accident has happened today, whereby Leroy Parker, only son of Thomas Barnes Parker, was instantly killed. As Mr. Parker's family rose from dinner they noticed crows in the corn field near the house, and he said to Roy, "Get your gun and shoot them." So Roy left with his gun and presently they heard the report of its firing, but could see nothing of Roy. So they shouted to him but receiving no answer they went to search for him and found him in an apple tree, lying across the limbs, dead. One side of his head was blown away, and they have no doubt that in climbing into the tree to get a place where he would be hidden from the crows so as to better shoot them, his gun was accidentally discharged, with the above result. He was fourteen years old and small of his age. His parents have but Edith left, a younger girl, and they are almost mentally deranged by the shock. (T.S.R. 53. 2 P.M. 90. S.S. 73.)

July 22. Saturday. Hannah went with Celeste to Aunt Susie's to arrange the music for the funeral. On the way over, Celeste fell upon the hard ground, hit his head and fainted, near the last bridge. Hannah picked him up and carried him in her arms the rest of the way. He soon recovered and about noon they started home. On the way he fell in a spasm, and again she carried him to Aunt Susie's house, where they applied remedies and brought him to. They then brought back home in a carriage and Dr. Barbour is treating him, as he has a