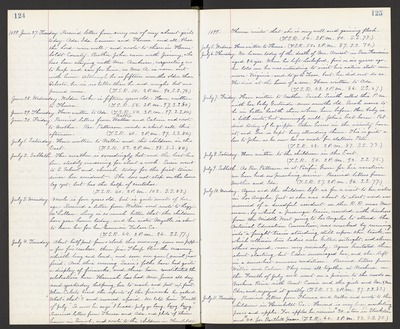 1899. June 27. Tuesday. Received letters from every one of my absent - girls today - Ada, Ida, Eunice and Theresa - and all, bless the Lord - were well, - and wrote to those in Humboldt County. Brother John came with Jimmy, who has been staying with Mrs. Ambrose, requesting us to keep and care for him, as Mrs. A. is worn out with him. Although he is fifteen months older than Celeste, he is no taller than he, and weighs but one pound more. (T.S.R. 50. 2 P.M. 92. S.S. 78.)

July 2. Sabbath. The weather is exceedingly hot, and the heat has been steadily increasing for about a week. Susie went to S. School and church today for the first time since her accident. She does not step on the lame leg yet, but has the help of crutches. (T.S.R. 60. 2 P.M. 102. S.S. 83.)

July 3. Monday. Merle is four years old, but is quite small of her age - Received a letter from Willie and wrote to Lizzie McLellan. Lucy is so much better that the children have gone home today, and her sister Myrtle is about to leave her for her home in Tulare Co. (T.S.R. 64. 2 P.M. 96. S.S. 77.)

July 4. Tuesday. About half past four o'clock this morning, some one popped a few fire crackers, then Jim Thorp blew the creamery whistle long and loud, and soon one gun (anvil) was fired. And this evening Susie's folks have had quite a display of fireworks, and these have constituted the celebration here. Hannah has had Mrs. Jones all day and yesterday helping her to wash and put up fruit. When Celeste heard the reports of the fireworks he asked "What's that?" and seemed afraid. We told him "Fourth of July." So now he says "I heard July go bang, bang, bang." Received letters from Theresa and Ada, and photo of their house in Sunol, and wrote to the children in Humboldt.

July 7. Friday. Have written to Mother. Sarah Smith called this P.M. with her baby Gertrude - seven months old. Sarah seems to be in better health than when here before. Her baby is a little mite, but seemingly well. John's best horse - Pat died today of la grippe. Other horses in the vicinity have it, and Geo. is kept busy attending them. This is quite a loss to John, as he now has no mate for stallion Pete. (T.S.R. 48. 2 P.M. 87. S.S. 73.)

July 10. Monday. Agnes and the children left us for a visit to her sisters in Los Angeles. Just as she was about to start, word was received of a dreadful accident on the R.R. near Newman, by which a passenger train, crowded with teachers from the Middle West going to Los Angeles to attend the National Education Convention, was wrecked by running into a freight train standing still upon the track, in which collision two ladies were killed outright, and eleven others injured, none very seriously. Agnes hesitated then about starting, but Eddie encouraged her, and she left in a somewhat nervous condition. Received letters from Willie and Calvin. They were all together at Nashua on the Fourth of July and went on a picnic to the woods on Nashua River with Aunt Carrie and the girls and Mr. & Mrs. Ober, and enjoyed it greatly. (T.S.R. 53. 2 P.M. 97. S.S. 83.)