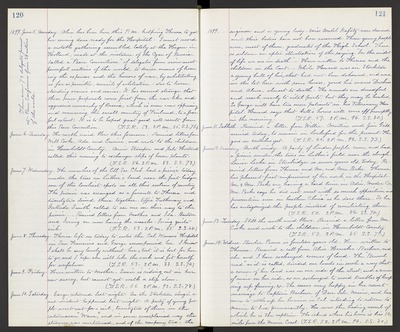 1899. June 5. Monday. Alice has been here this P.M. helping Theresa to get her serving done ready for the Hospital. I must record a notable gathering assembled lately at the Hague in Holland. made at the instance of the Czar of Russia, called a "Peace Convention" of delegates from nine most powerful nations of the world. to devise means of lessening the expenses and the horrors of war, by substituting as far as possible, councils of arbitration, also to lessen standing armies and navies. It has seemed strange that these peace proposals came first from the war like and aggressive monarchy of Russia, which is even now oppressing and menacing the small country of Finland, to a fear feel extinct. It is to be hoped great good will result from this Peace Convention. (T.S.R. 58. 2 P.M. 85. S.S. 75.)

There were 72 delegates present at Peace Conference from 24 nations of the world.

June 6. Tuesday. The north wind blew this forenoon. Received letters from Will Cooke, Ada and Eunice, and wrote to the children in Humboldt County. Annie Stamper and Kate Hartwell called this evening to exchange slips of house plants. (T.S.R. 56. 2 P.M. 83. S.S. 73.)

June 7. Wednesday. The members of the Ell See Club had a picnic today under the trees in Luther's land near the first bridge, one of the loveliest spots in all this section of country The picnic was arranged as a farewell to Theresa and twenty two dined there together. Effie Tretheway and Gertrude Smith called to see me on their way to the picnic. Received letters from Mother and Ida. Benton and Irving are now having the measles, Irving quite sic. (T.S.R. 53. 2 P.M. 85. S.S. 68.)

June 8. Thursday. Theresa left us today to enter the Cal. Womans' Hospital in San Francisco and George accompanied her. I know I shall be very lonely without her, but it is best for her to go, and I hope she will like the work and fit herself for usefulness. (T.S.R. 52. 2 P.M. 88. S.S. 74.)

June 10. Saturday. George returned last night. In the Stockton slough a sad accident happened last night. A party of young people went out for a sail, twenty two of them in the catamaran "Wave", and in some unexplained way the streamer was overturned, and of the company two - the

1899. engineer and a young lady, Miss Mabel Kafitz were drowned and their bodies have not been recovered. These young people were, most of them, graduates of the High School. There is seldom an after illustration of the saying. "In the midst of life we are in death." Have written to Theresa and the children in the East. While Howard was in Stockton a young bull of his, that had not been dehorned, and was in the lot here with same horses, gored his mares Duchess and Alma, almost to death. The wounds are dreadful and reach nearly to vital parts, but they may be healed. So George will have two more patients in his Veterinary Hospital. Howard says that bull's horns will come off promptly in the morning. (T.S.R. 57. 2 P.M. 96. S.S. 80.)

June 12. Monday. North windy. A party of Linden people cane and had a picnic under the trees in Luther's field hear the slough. Louise Locke in Sturbridge is seven years old today. Received letters from Theresa and Mr. and Mrs. Perks. Theresa has pleasant first impressions of her work in the Hospital. Mr. & Mrs. Perks are having a hard time in Adin, Modoc Co. Mrs. Perks says he "did not meet with so much opposition and persecution even in heathen China" as he does there. So he has antagonized the people instead of conciliating them. (T.S.R. 50. 2 P.M. 86. S.S. 70.)

June 14. Wednes. Benton Pascoe is fourteen years old. Have written to Theresa. Received a call from Alice-Hamaker-Barbour, and she and I have exchanged corners of land. The "Bruml road- as it is called, divided our lands in such a way that a corner of her land was on our side of the street, and a corner of mine on her side, so we exchanged to avoid troubles of keeping up fencing, x.c. She seems very happy in her recent marriage to Captain Barbour of Deer Isle, Maine, and has come to settle up her business in Cal. intending to return to Maine to live permanently. he was the trading vessel of which he is the captain. The island where his home is lies 12 miles from the Maine Coast. (T.S.R. 52. 2 P.M. 94. S.S. 80.)