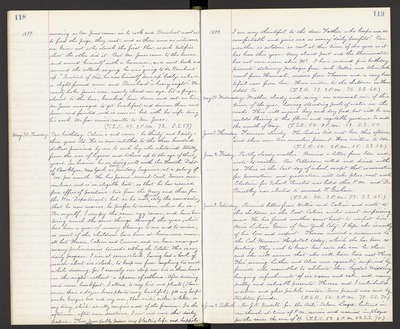 1899. morning as Mr. Jones came in to Cooke and Barnhart went out to feed the pigs, they met, and as there were no witnesses, we know not who struck the first blow, as each testifies that the other did it. But Mr. Jones came to the house and armed himself with a hammer, and went back and renewed the attack, saying he was "going to do Barnhart up." Instead of this, he was himself "done up" badly, as he is a slight framed man and Barnhart "a heavy weight." He nearly broke Jones's arm, nearly closed one eye, bit a finger almost to the bone, knocked him down and sat on him, Mr. Jones managed to get breakfast and dinner, then went home and fainted, and is now in bed with his wife doing his work. We fear serious results to Mr. Jones. (T.S.R. 47. 2 P.M. 72. S.S. 57.)

May 30. Tuesday. Our birthday. Calvin's and mine, he thirty and I sixtythree years old. He is now entitled to the three hundred dollars promised by me to each boy who abstained totally from the use of liquors and tobacco up to the age of thirty years. In business he is doing well with the Health Dept. of Brooklyn, New York, as Assist. Sanitary Engineer, at a salary of $100. per month. He has passed several Civil Service examinations, and is on eligible lists, so that he has received five offers of positions, two from the Navy and three from, the War Department, but as he was offered only the same salary that he now receives, he prefers to remain where he is. For myself, I occupy the same cozy corner, and have been doing much the same things through the year, which has been a year of many blessings to me and to mine, as most of the children have been at home once more, all but Horace, Calvin and Eunice, and we have arranged many preliminaries towards settling the Estate. This is my daily program. I rise at seven o'clock, having had a bowl of mush about six o'clock, to keep me from coughing too much while dressing, for I scarcely ever sleep over two or three hours in the night without a spasm of asthma. After dressing and more breakfast, I attend to my bird and plants (I have more than a dozen house plants very beautiful), fill my lamps make George's bed and my own, then write, either a letter or my diary, which usually occupies most of the forenoon. In the afternoon, after noon devotions. I saw and read the daily paper. Thus peacefully passes my fleeting life and happily.

1899. I am very thankful to the dear Father who keeps me so comfortable and gives me so many "daily benefits." Our weather is seldom so cool at this time of the year as it has been this year. May almost past and the thermometer has not once risen above 90-. I have received five birthday presents, stationery packages from each Nellie and Alma Cooke comb from Hannah, scissors from Theresa and a very beautiful vase from Lou. Have written to the children in Humboldt Co. (T.S.R. 37. 2 P.M. 75. S.S. 60.)

May 31. Wednesday. Weather cloudy and rainy, an unusual rain of this time of the year, leaving standing pools of water in the roads. This will injure hay and dry feed, but will be an untold blessing to the flower and vegetable gardens. So ends the month of May. (T.S.R. 54. 2 P.M. 58. S.S. 55.)

June 2. Friday. Partly cloudy weather. Received a letter from Ida and wrote to mother. Rev. Patterson called and dined with us. This is the last day of school, except that examination for promotion and graduation will take place next week. Election for School Trustee was hold this P.M. and Dr. Priestley was elected to succeed T. Geehan. (T.S.R. 46. 2 P.M. 73. S.S. 65.)

June 3. Saturday. Received letters from Willie and Calvin and wrote to the children in the East. Calvin writes most surprising news. He has found another sweetheart to comfort him. Miss Lilian Green of New York City. I hope she is worthy of his love and respect. Theresa received a summons to the Cal. Womans' Hospital today, which she has been expecting. They wish to know how soon she can be there and she will answer that she will leave here next Thurs. This evening Luther and Alice were agreeable "surprised" by friends who assembled to celebrate their Crystal Wedding, bringing refreshments of ice cream and cake, and many pretty and valuable presents. Theresa and I contributed a silver and glass prickle castor. Some presents were sent by Stockton friends. (T.S.R. 50. 2 P.M. 79. S.S. 70.)