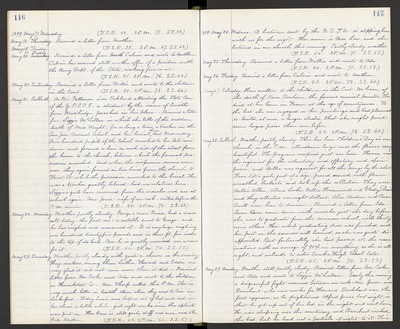 May 21. Sabbath. As Rev. Patterson is in Oakland attending the State Con. of the Y.P.S.C.E. a student by the name of Smith from Woodbridge, preached in his place. Received a letter from Lizzie McLellan in which she tells of the sudden death of Miss Wright, for so long a time a teacher in the San Jose Normal School, and burial there last Wednesday. Five hundred pupils of the School marched to her late residence and formed a line on each side of the street from the house to the church, between which the funeral procession marched. And when the impressive services were over they again formed in two lines from the church to First St. while the procession marched to the burial. She was a teacher greatly beloved had no relations here. Lizzie's girls have recovered from the measles and are at school again. Mrs. Jones-wife of our cook- called before the P.M. service. (T.S.R. 44. 2 P.M. 78. S.S. 68.)

May 22. Monday. Weather partly cloudy. George's mare Prima, had a mare colt today the first one a notable event to George and he has weighed and measured it. It is very large, weighing one hundred twenty five pounds and is three ft. five inches to the top of its back. Now he is greatly exercised over a name for it. (T.S.R. 46. 2 P.M. 74. S.S. 55.)

May 23. Tuesday. Weather partly cloudy with quite a shower in the evening. Hay makers, among them Luther, Howard and Eddie, are very glad it did not rain more than it did. Received letters from Mr. Cooke and Ada and wrote to the children in Humboldt Co. Mrs. Thorp called this P.M. She is very much better in health then when they use to live in Lockeford. Today Susie was helped out of bed and sat in here choir a little while first eight weeks since the splint were put on. Her knee is still quite stiff and sore and the hip tender. (T.S.R. 42. 2 P.M. 66. S.S. 57.)

May 27. Saturday. Have written to the children in the East. We learn of the death of Rosa Bonheur, the famous animal painter. She died at her home in France at the age of seventy seven. To the last she was engaged on her paintings and had planned is build, at once, a larger studio, that she might paint some larger pieces than even before. (T.S.R. 42. 2 P.M. 78. S.S. 60.)

May 28. Sabbath. Weather partly cloudy. This has been Children's Day in our church in the P.M. attendance large and the flowers very beautiful. The program occupied just one hour. Theresa was the organist for the voluntary and offertory, and choir piece, and Nellie was organist for all the songs by the school. Four little girls, just of a size, passed around with flower wreathed baskets, and took up the collection. They were Nellie Allen, Alma Locke, Nellie Hammond and Gladys Draico and the collected over night dollars. Alice Andrew and Oscar Swett were here to dinner. Received a letter from Ida. Susie Pascoe came down with measles just the day before she was to graduate from the common school, with thirtynine others. Her white graduating dress was finished and her part in the exercises well learned, so she was quite disappointed. But fortunately she had passed all the examinations with an average of 95% in everything, so she is all right, and intends to enter Eureka High School later. (T.S.R. 45. 2 P.M. 70. S.S. 57.)

May 29. Monday. Weather still partly cloudy. Received letters from Mr. Cooke and Ada and wrote to Lizzie McLellan. Early this morning a disgraceful fight occurred between our cook - Mr. Jones - and Barnhart who now works for Howard. Barnhart was the first aggressor, as he frightened Alfred Jones last night, so that he got up out of his bed in the night and went home. He was sleeping over the courtway and Barnhart wished the bed, but he had not a particle of right to it. This