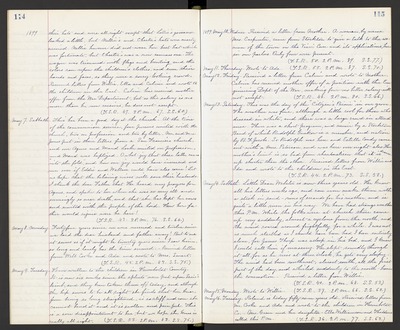 1899 their hats and were all right except that Lottie's gossamer leaked a little but Nellie's and Chester's hats were nearly ruined. Nellie however did not wear her best hat which was fortunate, but Chester's was a new canvass one. The wagon was trimmed with flags and bunting and the colors ran whom the children's clothes, and even their hands and faces, so they were a sorry looking crowd. Received letters from Willie. Etta and Calvin and wrote to the children in the East. Calvin has received another offer from the War Department, but as the salary is no more than he now receives, he does not accept. (T.S.R. 47. 2 P.M. 67. S.S. 60.)

May 7. Sabbath. This has been a good day at the church. At the time of the communion service, four persons united with the church, two on profession and two by letter. Mr. and Mrs. Jones put in their letters from a San Francisco church, and our Agnes and Mand Locke united on profession, and Mand was baptized. O what joy that these latter came "into the fold," and how our joy would have increased and run over if Eddie and Wallace could have also come! Let no hope that the believing wives will save their husbands. I thank the dear Father that He heard my prayers for Agnes, and spoke to her when she was so very ill and seemingly so near death, and that she has kept her vows and united with the people of the Lord. How her father would rejoice were he here! (T.S.R. 43. 2 P.M. 76. S.S. 64.)

May 8. Monday. Forty four years since we were married and twelve since we laid the dear husband and father way! But to me it seems as if it might be twenty years since I saw him, so long and lonely has the time seemed. Received letter from Will Cooke and Ada and wrote to Mrs. Smart. (T.S.R. 45. 2 P.M. 83 S.S. 75.)

May 9. Tuesday. Have written to the children in Humboldt County. It is now six weeks since the splints were put upon Susie's limb, and they have taken them off today, and although the hip seems to be all right she finds that her knee, from being so long straightened, is so stiff and sore she cannot find it and it is swollen and painful. This is a sore disappointment to her, but we hope the knee is really all right. (T.S.R. 53. 2 P.M. 83. S.S. 75.)

May 12. Friday. Received a letter from Calvin and wrote to Mother. Calvin has received another offer of a position with the Engineering Dept. of the War, making four no better salary - will not accept. (T.S.R. 48. 2 P.M. 80. S.S. 66.)

May 13. Saturday. This was the day of the "Citizen's Picnic" in our grove. The weather was fine, although a little cool for those who dressed in white, and there was a large crowd in attendance. There was a short program, and music by a Stockton Band of which Rudolph Gnekow is a member, and oration by B.F. Jacobs. So Rudolph was here and Estelle Condy came out with a Mrs. Peterson, and was here over night also. Her mother's limb is so bad from rheumatism that it is drawn up shorter than the other. Received letters from Willie and Ida and wrote to the children in the East. (T.S.R. 44. 2 P.M. 73. S.S. 58.)

May 14. Sabbath. Little Dean Webster is now three years old. He knew all his letters weeks ago, and can even make them with a stick in sand-runs of errands for his mother, and is quite a little man in his way. We have had strange weather this P.M. While the folks were at church there came up very suddenly, almost a cyclone from the north, and the wind roared around frightfully for a while. I was not as much startled as I should have been had I been entirely alone, for James Thorp was asleep in his bed, and I knew I could call him if necessary. Her slept soundly through it all, for as he rises at three o'clock, he gets very sleepy. The wind had been southwest, almost south, all the first part of the day, and whirled suddenly to the north - hence the commotion. Received a letter for Willie. (T.S.R. 40. 2 P.M. 68. S.S. 53.)

May 16. Tuesday. Roland is today fifty seven years old. Received letters from Mr. Cooke and Ada and wrote to the children in Humboldt Co. Mrs. Green and her daughter Ella Williamson and Thaddeus called this P.M. (T.S.R. 36. 2 P.M. 77. S.S. 62.)