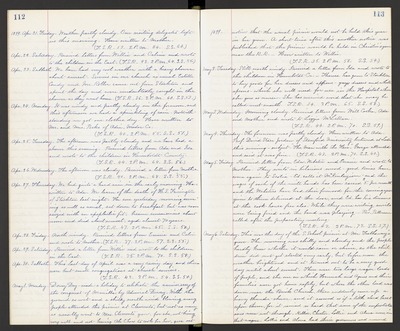 Apr. 23. Sabbath. We have had very cool weather with a heavy shower about sunset. Services in our church as usual. Estelle Condy and Mr. Roller came out from Stockton and spent the day and were undoubtedly caught in the shower as they went home. (T.S.R. 36. 2 P.M. 60. S.S. 53.)

Apr. 27. Thursday. We had quite a hard rain in the early morning. Have written to Ada. We learn of the death of H.S. Farrington of Stockton last night. He rose yesterday morning seeming as well as usual, sat down to breakfast but was soon seized with an apoplectic fit, became unconscious about noon and died about sunset, aged almost 70 years. (T.S.R. 47. 2 P.M. 65. S.S. 50.)

May 1. Monday. Dewey Day made a holiday to celebrate the anniversary of the conquest of Manilla by Admiral Dewey. With the ground so wet and a chilly north wind blowing, many people attended the picnic at Clement's, but not as many as usually went to Mrs. Clements grove, for she, not being very well and not having Ah Chow to cook for her, gave out

1899. notice that the usual picnic would not be held this year in her grove. A short time after this another notice was published that the picnic would be held in Christie's grove near the R.R. Have written to Willie. (T.S.R. 35. 2 P.M. 58. S.S. 54.)

May 2. Tuesday. Still north windy. Received a letter from Ida and wrote to the children in Humboldt Co. Theresa has gone to Stockton to buy goods for her dresses and aprons grey dresses and white aprons which she will need for use in the Hospital when she goes as nurse. She has received word that she may be called next month. (T.S.R. 34. 2 P.M. 65. S.S. 58.)

May 4. Thursday. The forenoon was partly cloudy. Have written to Ada. Prof. David Starr Jordan of Stanford University lectured at Lodi this evening subject. "The Man with the Hoe," George attended and said it was fine. (T.S.R. 43. 2 P.M. 70. S.S. 60.)

May 5. Friday. Received letters from Edw. Webster and Eunice and wrote to Mother. They write in hilarious mood good times have come again to Scotia Ed. calls it McKinleyism and the wages of each of the mill hands has been raised $5. per month and the Websters have had their firewood for the coming year given to them delivered at the door, and Ed has his dinners at the cook house free also. While they were writing, anvils were being fired and the band was playing. Rev. Patterson called after the preparatory meeting. (T.S.R. 43. 2 P.M. 73. S.S. 57.)

May 6. Saturday. This was the day of the S. School picnic at Mr. Tretheway's grove. The morning was chilly and cloudy and the people hardly knew whether it would rain or shine, so the children did not get started very early, but before noon the weather brightened and it turned out to be a very good day until about sunset. There were two large wagon loads of people, and the one in which Hannah and Agnes and their families were got home safely, but when the other load was down near the Brick Church, there suddenly came up a heavy thunder-shower, and it seemed as if a little cloud burst upon them, for it rained so hard that some of the unprotected ones were wet- through. Nellie, Chester, Lottie and Alma were in that wagon. Lottie and Alma had their gossamers and removed