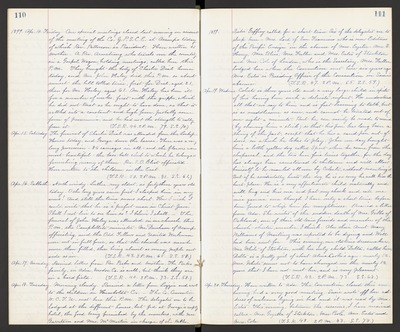 1899. Apr. 14. Friday. Our special meetings closed last evening on account of the meeting of the Co. Y.P.S.C.E. at Acampo today of which Rev. Patterson is President. Have written to Mother. A Rev. Armstrong who travels over the country in A Gospel Wagon, holding meetings, called here this P.M. They brought the body of Charlie Dial home today, and Mr. John Haley died this P.M. so about sunset the bell tolled twice, first for Dial, aged 21, then for Mr. Haley, aged 61. Mr. Haley has been ill for a number of weeks, first with the grippe, which he did not treat as he ought to have done, so that it settled into a constant and high fever, probably some form of pneumonia, and he had not the strength to rally from it. (T.S.R. 44. 2 P.M. 79. S.S. 70.)

Apr. 15. Saturday. The funeral of Charlie Dial was attended from the Lockeford House today, and George drove the hearse. There was a very long procession 86 carriages in all and the flowers were most beautiful the base ball club to which he belonged furnishing many of them. Rev. S. O. Eliot officiated. Have written to the children in the East. (T.S.R. 50. 2 P.M. 81. S.S. 61.)

Apr. 16. Sabbath. North windy. Luther, my eldest, is fortythree years old today. O the long years since first I clasped him in my arms! And still the time seems short. How I wish I could write that he is a "perfect man in Christ Jesus." Shall I not live to see him so? I believe I shall. - The funeral of John Haley was attended in our church this P.M. the Campbellite minister Mr. Durham of Acampo officiating, and the Odd Fellows and United Workmen were out in full force, so that the church was much more than filled, there being almost as many people out side as in. (T.S.R. 43. 2 P.M. 65. S.S. 58.)

Apr. 18. Tuesday. Morning cloudy. Received a letter from Lizzie and wrote to the children in Humboldt Co. The Co. Convention W. C. T. W. met here this P.M. The delegates are to be lodged at the different houses, but fed at George's empty hotel, the food being furnished by the members, with Mrs. Garretson and Mrs. McMartin in charge of the tables.

1899. Sister Geffroy called for a short-time. Six of the delegates are to sleep here Mrs. Lord of San Francisco who is now Editress of the "Pacific Ensign" in the absence of Mrs. Eyster, Mrs. S. Harry, Mrs. Bliss, Mrs. Fuller and Mrs. Estes of Stockton and Mrs. Cole of Linden, who is the Secretary. Mrs. Fuller lodged here when the Convention met here six years ago. Mrs. Estes is Presiding Officer of the Convention in Susie's absence. (T.S.R. 47. 2 P.M. 65. S.S. 59.)

Apr. 19. Wednes. Celeste is three years old and a very large child in spite of his having been such a delicate infant. He understand all that we say to him and is fast learning to talk, but is as meddlesome as ever, and cannot be trusted out of our sight a minute. But he can easily be made to mind (by showing him a stick) so that his pen has long been a thing of the past, except that he has a sand pen out of doors, in which he likes to play. John one day brought him a little yellow dog called Sport when he came from the chaparral, and the two have fine times together, for the dog has always been accustomed to children and will allow himself to be mauled all over by Celeste, without resenting it. But If he accidentally hurts the dog he is so sorry he will kiss the hurt place. He is a very affectionate child naturally and will hug and kiss me and pat my check and call me "nice gamma" even though I have only a short time before been forced to whip him for naughtiness. Received a letter from Ada. She writes of the sudden death of Mrs. Gibbs of Oakland, one of their old-time friends and member of the church charter member, I think. Also their Aunt Mary Williams of Martinez was reported to be dying and Will had been sent for. This evening, our old time dressmaker, Mrs. White of Stockton, with her only child Delta, called here. Delta is a pretty girl of about Alma Cooke's age - nearly 12. Mrs. White seems not to have changed in the nearly 12 years that I have not met her, and is very pleasant. (T.S.R. 42. 2 P.M. 73. S.S. 68.)

Apr. 20. Thursday. Have written to Ada. The Convention closed this eve, having had a very good meeting. Susie wrote off her address of welcome lying in bed and it was read by Mrs. Estes. This evening, between the sessions, I have received callers Mrs. Gogette of Stockton, Mrs. Poole, Mrs. Estes and Mrs. Cole. (T.S.R. 48. 2 P.M. 83. S.S. 73.)