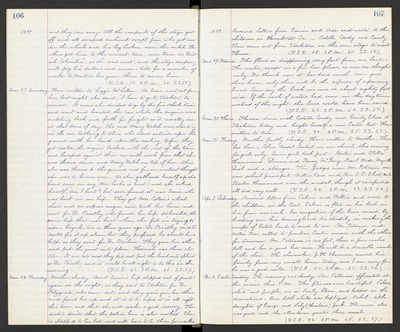 1899. and they ran away. All the occupants of the stage got off and all escaped unhurt except Jim, who got under the wheels and his leg broken near the ankle. The others got him to the nearest town, some town in British Columbia, as the road went, and the stage company will pay his doctor's and nurse's bills for a number of weeks. So Mertice has gone there to nurse him. (T.S.R. 39. 2 P.M. 60. S.S. 55.)

Mar. 27. Monday. Have written to Lizzie McLellan. As Susie went out from here last night she said, "I have to go to Stockton tomorrow." It seems she decided to go by the five o'clock train and went and boarded the car while the engine was switching back and forth for freight as it usually does at that time of day. She and Mary Welch were standing in the car talking to Alice who stood outside upon the ground with her hand upon the railing. Before they got seated, the engine backed with the rest of the train and bumped against their car with such force that she was thrown down and Mary Welch on top of her. Alice also was thrown to the ground and for an instant thought she was to be run over. As she gathered herself up she heard some one say, "Mrs. Locke is hurt,' and she asked herself," Am I Hurt"? but soon found it was Susie who was hurt in one hip. They got Mrs. Cotton's wheel chair and an express wagon and took her home and sent for Dr. Priestley, who found her hip dislocated, the same hip that was hurt when she fell in trying to ride a bicycle, two or three years ago. Dr. Priestley said he could fix it up alone, but they preferred he should have help, so they sent for Dr. Barbour. They gave her ether and put the joint into place. Hannah was there, also Alice. It was late and they did not put the limb into splints as Dr. Priestley said it would be all night to do this in the morning. (T.S.T. 41. 2 P.M. 65. S.S. 57.)

Mar. 28. Tuesday. Weather cloudy. Aunt Susie's hip slipped out of joint again in the night, so they sent to Stockton for Dr. Fitzgerald, who came out, and they again gave her ether and fixed her up, and it is to be hoped it is all right this time and that she will make a good recovery. The doctors decide that the pelvic bone is also cracked. She is strapped to her bed and will have to be there for weeks.

Mar. 29. Wednes. The flood is disappearing very fast from our lands. The water, except in a few low places, is now in sloughs only. We think now it has done much more good than harm, only there will be the expense of repairing levees. Some say the break in ours is about eighty feet wide. If the rush of waters had come in the daytime instead of the night, the levee could have been saved. (T.S.R. 42. 2 P.M. 60. S.S. 55.)

Mar. 31. Friday. Weather partly cloudy. Have written to Mother. There has been a Silver Medal Contest in our church this evening for girls only. Seven girls took part. Bertie and Stella Hammond, Donna and Pansy McGary, Pearl Wade, Myrtle Dial and a stranger. The Judges were Mr. Peterson -our new school principal, Nellie Ross and Rev. S. O. Eliot, M. E. Bertie Hammond won the medal, though it is reported all did very well. (T.S.R. 44. 2 P.M. 62. S.S. 54.)

Apr. 1. Saturday. Received letters from Calvin and Willie and wrote to the children in the East. Calvin is flat on his back in bed from over work has congestion of the liver caused by bending over his drawing board too steadily in making the maps of Estate lands to send to us. Mr. Peterson and Nellie Ross called to practice Eater music with the others for tomorrow. Mr. Peterson is six feet, three or four inches tall and has a good bass voice. He will be a desirable member of the choir. The shoemaker, J. H. Sharmon, moved his family from my small house today, and I am sorry for he was a good renter. (T.S.R. 43. 2 P.M. 65. S.S. 56.)

Apr. 2. Easter Sunday. The morning was cloudy. Rev. Patterson officiated at the service this P.M. The flowers were beautiful. Lilacs, white and purple, are in lovely bloom, and helped in the decorations. One little child was baptized - Ethel - little daughter of George and Lily (Christian) Jack. The music also was good and the attendance greater than usual. (T.S.R. 46. 2 P.M. 65. S.S. 57.)