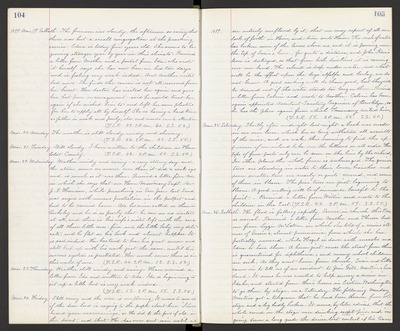 1899. Mar. 19. Sabbath. The forenoon was cloudy, the afternoon so rainy that there was but a small congregation at the preaching service. Edna is today five years old. She seems to be growing stronger year by year in this climate. Received a letter from Mother and a postal from Ida, who wrote it herself says she has now been in bed ten days and is feeling very weak indeed. And Mother writes bad news. She finds the cancer is not all removed from her breast. Her doctor has visited her again and gave her but poor encouragement said he would treat her again if she wished him to and left her some plastic for her to apply all by herself. She is having a hard time as father is weak and poorly, also and needs much attention. (T.S.R. 43. 2 P.M. 60. S.S. 52.)

Mar. 22. Wednesday. Weather windy and rainy a very stormy day - and the storm seems no nearer over than it did a week ago and is much as it was then. Received a letter from Ada in which she says that our Home Missionary Serpt. Rev. J. K. Harrison, white preaching in San Jose last Sund was seized with nervous prostration in the pulpit and had to be carried home. Ada has since called on them in Berkeley and he is so poorly that he can see no visitors at all, and there is his wife's sister left with the care of all those little ones five, and the little baby very delicate, and he flat on his back and almost helpless. It is sad indeed. He has tried to bear his great sorrow and still keep up with his work just the same, until his nervous system is prostrated. How much sorrow there is in this would of ours. (T.S.R. 46. 2 P.M. 52. S.S. 53.)

Mar. 24. Friday. Still rainy and the river is overflowing. It seems to me as if the dear Lord is saying to the people about here. "I have heard your murmurings", as He did to the Jews of old in the desert, and that He has now sent rain until we

1899. are entirely overflowed by it, that we may repent of all our lack of faith in Him, and turn unto Him. The rush of water has broken some of the levees above us, and it is pouring over the top of Susie's levee for quite a distance, and John Kerr's levee is destroyed, so that from both directions it is coming over our land. The island is deep under water, and what will be the effect upon the boys alfalfa and barley, we do not know. A good soaking will do them good, but they will be drowned out if the water stands too long on them. Received a letter from Calvin and wrote to Mother. Calvin has been again appointed Assistant Sanitary Engineer of Brooklyn, so he has the place again from which Tammany routed him. (T.S.R. 55. 2 P.M. 62. S.S. 60.)

Mar. 25. Saturday. Shortly after midnight last night a break was made in our own levee, which has so long withstood all assaults of the river, and we wake this morning to find the appearance of an inland lake over the bottoms on all sides. The tops of fence posts only can be seen on the line by the orchard. In other places the whole fence is submerged. The quince trees are standing in water to their lower branches and some smaller trees are nearly or quite covered, and some of them in bloom. The pear trees are just beginning to bloom. A good wetting will be of immense benefit to the fruit. Received a letter from Willie and wrote to the children in the East. (T.S.R. 42. 2 P.M. 59. S.S. 55.)

Mar. 26. Sabbath. The flood is falling rapidly. Service in church this P.M. as usual. Received a letter from Mother and Theresa had one from Lizzie McLellan in which she told of a serious illness of Gussie's, almost pneumonia, from which she has partially recovered, while Hazel is down with measles and Edna to have them. A house just across the street from them is quarantined for diphtheria, and many school children are sick. As they went home from church, Susie and Lilla came in to tell us of an accident to Jim Gill, Mertice's husband. It seems he was wanted to help survey a mine in Idaho, and started from their home in Eastern Washington to go there by state, on a Saturday. The following Monday Mertice got a tilegram that he had been thrown from the stage and a leg badly broken. It seems, by later advices, that the whole crowd on the stage were drinking except Jim, and in going down a long grade the driver lost control of his team