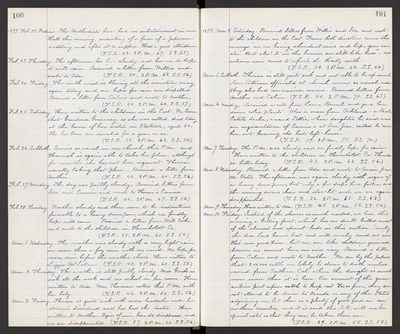 Feb. 26. Sabbath. Services as usual in our church this P.M. and Hannah is again able to take her place, although for months she has not been organist, Theresa usually taking that place. Received a letter from Mother. (T.S.R. 40. 2 P.M. 60. S.S. 56.)

Feb. 28. Tuesday. Weather cloudy and there seen to be indications favorable to a heavy down pour, which we fondly hope will come. Received a letter from Will Cooke and wrote to the children in Humboldt Co. (T.S.R. 45. 2 P.M. 60. S.S. 54.)

Mar. 3. Friday. Theresa is quite sick with severe headache and her stomach disordered and has had the doctor. Have written to Mother. Signs of rain have all disappeared and we are disappointed. (T.S.R. 37. 2 P.M. 60. S.S. 56.)

1899. Mar. 4. Saturday. Received letters from Willie and Ida and wrote to the children in the East. From both directions comes the message "we are having abundant rains and hope you are also". But alas! to us "the heavens are still like brass"- no welcome rain comes to refresh the thirsty earth. (T.S.R. 34. 2 P.M. 64. S.S. 64.)

Mar. 5. Sabbath. Theresa is still quite sick and not able to be up much Rev. Patterson officiated at church service as usual and they also had communion service. Received letters from Mother and Calvin. (T.S.R. 40. 2 P.M. 70. S.S. 63.)

Mar. 6. Monday. Received a call from Laura Bruml and gave her some colia plants. Also a man from Oakland a Real Estate dealer, named Pettis, whose daughter he said was an acquaintance of Eunice's at San Jose, called to see her, not knowing she had left home. (T.S.R. 39. 2 P.M. 75. S.S. 70.)

Mar. 8. Wednesday. Received a letter from Ada and wrote to Cousin Joan M. Bates. The afternoon was again cloudy, with signs of a heavy down pour, but only a few drops have fallen and the evening seems clear and star-lit, and we are again disappointed. (T.S.R. 36. 2 P.M. 65. S.S. 53.)

Mar. 10. Friday. Instead of the showers so much needed, we had this morning a killing frost, which has no doubt killed most of the almond and apricot buds in this section. Surely the dear Lord knows best and will surely send us in His own good time, but we are like children grieved because we cannot have our own way. Received a letter from Calvin and wrote to Mother. We see by the papers that 200,000 cattle are likely to starve to death unless moved from Southern Cal. where the drought is much more severe than it is here. On account of the quarantine put upon cattle to keep out Texas fever, they are not allowed to be driven to Nevada or any of the States adjoining us, but there is a plenty of good feed in our northern counties, and it is said the R.R. will make special rates so that they can be taken there soon. (T.S.R. 29. 2 P.M. 55. S.S. 53.)