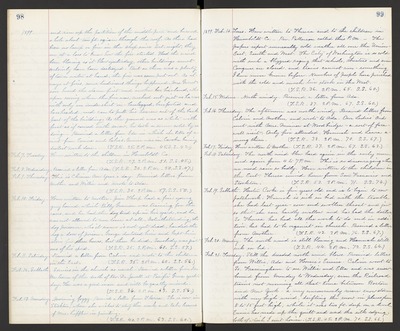 1899. and ran up the partition of the middle part and burned a hole about ten ft. square through the roof. As there had been no lamp or fire in the shop since Sat. night, they are at a loss to know how the fire started. Had the wind been blowing as it blew yesterday, other buildings must certainly have been destroyed. But as there was a plenty of town water at hand, the fire was soon put out. As always at fires, some ludicrous things happened. Mrs. Garretson heard the alarm first and awoke her husband, who upon seeing where the fire was, rushed out just as he was with only an undershirt on barelegged, barefooted and bareheaded, and ran to pull his hearse out of the back part of the building. As the ground was as white with frost as if covered with snow, he took a severe cold by so doing. Received a letter from Ida in which she tells of a visit from Eunice and babies. Eunice was in Eureka having dentist work done. (T.S.R. 25. 2 P.M. 45. S.S. 42.)

Feb. 10. Friday. Have written to Mother. Jim Thorp had a fine young grey hound, which Billy Gannon was training for the races, and he had the dog tied up in his yard, and he was not allowed to run loose at all. Notwithstanding, the dog poisoner, who it seems is not yet dead, handed the dog a dose of poison. George doctored him and kept him alive for three hours, but them he died. Somebody was jealous of his speed. (T.S.R. 35. 2 P.M. 60. S.S. 57.)

1899. Feb. 14. Tues. Have written to Theresa and to the children in Humboldt Co. Rev. Patterson called this P.M.- The papers report unusually cold weather all over the Union - East, South and West. The City of Washington is so cold with such a blizzard raging that schools, theaters and even Congress, are closed and trains cannot run - something I have never known before. Numbers of people have perished with the cold and much live stock in the West. (T.S.R. 36. 2 P.M. 65. S.S. 60.)

Feb. 16. Thursday. The afternoon was north windy. Received letters from Calvin and Mother and wrote to Ada. Our Ladies 'Aid met with Mrs. Minner at Woodbridge a sort of farewell visit. Only five attended, Hannah and Laura among them. (T.S.R. 38. 2 P.M. 70. S.S. 67.)

Feb. 19. Sabbath. Hester Cooke is five years old and is to begin to sew patchwork. Hannah is sick in bed with the trouble she had last year sore and swollen throat and jaw so that she can hardly swallow and has had the doctor. So Theresa has had all the work to do and in addition, has had to be organist in church. Received a letter from Mother. (T.S.R. 43. 2 P.M. 76. S.S. 67.)

Feb. 21. Tuesday. Still the dreaded north wind blows. Received letters from Willie, Ada and Horace's Eunice. Calvin went to So. Framingham to see Willie and Etta and was snowbound from Monday to Wednesday, even the Railroad trains not running all that time between Boston and New York a very uncommonly severe snow storm with very high wind, drifting the snow in places from 8 to 15 feet high, while it was two ft deep on a level. Eunice has made up the quilt and used the silk edging both of which I sent Louise. (T.S.R. 45. 2 P.M. 70. S.S. 66.)