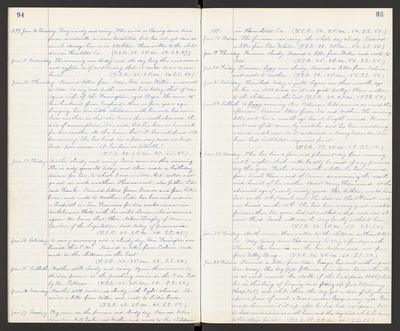 Jan. 12. Thursday. Received letters from Ada, Ida and Willie, and wrote to Ada. A very sad death occurred here today, that of Mrs. Angus, wife of Abe Farrington, aged 38 yrs. She came to her husband from England, three or four year ago, bringing her two little children with her, and has since had another, so that she leaves three motherless ones. She died of consumption, it is said, but has been so homesick for her mother all the time, that it has interfered with her recovery. She has lived in a poor way and worked hard - poor woman - it has been so pitiable! (T.S.R. 34. 2 P.M. 47. S.S. 45.)

Jan. 13. Friday. Weather cloudy and rainy. Susie came in this morning. She is sixty years old today, and Alice mad a birthday dinner for there, to which I was invited, but could not go out in such weather. Theresa went, also father, Lilla and Frank. Received letters from Eunice and from Lillie Greve, and wrote to Mother. Lillie has been sick and in a hospital in San Francisco for two weeks is now in Mokelumne Hill with her sister Laura, who is married again. We learn that Hon. Nelson Dingley of Maine, Speaker of the Legislative, died today of pneumonia. (T.S.R. 42. 2 P.M. 46. S.S. 45.)

Jan. 17. Tuesday. Fog rain in the forenoon and cloudy day. Received letters from Ada, Will Cooke and Mother and wrote to the children

Jan. 22. Sabbath. A foggy morning. Rev. Patterson held services as usual this afternoon. Received letters from Ida and Mother. The missing letter sent her a month ago has at length arrived. It was sent out of its course by mistake and has been wandering around until now. As it contained a Money Order, Mr. Ambrose had instituted inquiries for it. (T.S.R. 37. 2 P.M. 59. S.S 50.)

Jan. 23. Monday. This has been a fair and pleasant day from morning until night, which could hardly be said of any previous day this year. Father came with a letter he had received from Sarah Hammond of Carver, announcing the death and burial of her mother - Aunt Mary Hammond - at the advanced age of nearly ninety years. Her birthday would have been on the 10th of March next. She died on the 11th inst. and was buried on the 15th. She had been a very great invalid for more than two years, had not walked a step and was almost blind. Sarah will now be very lonely without her. (T.S.R. 36. 2 P.M. 59. S.S. 50.)

Jan. 25. Wednes. Received a letter from Ada. George has met with a great loss today. His dog JYP followed him down town where he is at work around the stable of the Enterprise Hotel (which he is thinking of buying and fitting up for a Veterinary Hospital), and while there, the dog got a dose of strychnine upon a piece of meat, almost under George-s very eyes. Geo. made him vomit it up after he had had one spasm, but he had no medicines with him, and the dog died while he came to his office for it. (T.S.R. 39. 2 P.M. 60. S.S. 55.)