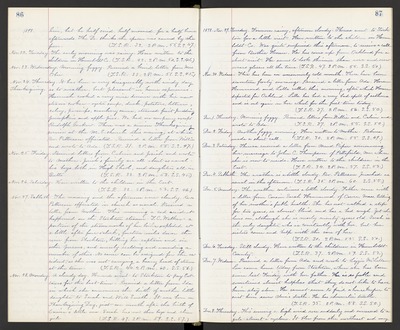 Nov. 24. Thursday. It has been a very disagreeably north windy day Thanksgiving. as to weather, but pleasant in home experiences. Hannah cooked a very nice dinner with her new steam cooker oyster soup, duck, potatoes, lettuce, celery, parsnips, cranberry sauce, steamed fruit pudding pumpkin and apple pies. We had no company except Rudolph Gnekow. There was a union Thanksgiving service at the M.E. church this evening, at which Rev. Patterson officiated. Received a letter from Willie and wrote to Ada. (T.S.R. 31. 2 P.M. 55. S.S. 47.)

Nov. 27. Sabbath. The morning and the afternoon were cloudy. Rev. Patterson officiated in church as usual. Received a letter from Mother. This morning a sad accident happened on the Stockton steamer T.C. Walker - a portion of the steam works of her boiler exploded at a little after four o'clock, fourteen miles down the river from Stockton, killing her captain and six other persons, and severely scalding and wounding a number of others. No cause can be assigned for the accident, as she was not carrying a heavy head of steam at the time . (T.S.R. 44. 2 P.M. 60. S.S. 56.)

Nov. 28. Monday. A cloudy day. Howard went to Stockton to pay Est. taxes for the last time. Received a letter from Ida in which she announces the birth of another little daughter to Sarah and Will Smith. It was born on Thanksgiving Day, just one month after the birth of Eunice's little one - Sarah has now three boys and three girls. (T.S.R. 47. 2 P.M. 59. S.S. 57.)

1898. Nov. 29. Tuesday. Forenoon rainy, afternoon cloudy. Theresa went to Stockton for a little visit. Have written to the children in Humboldt Co. Was quite surprised this afternoon, to receive call from Brother Horace. He has come up from Oakland for a short visit. He seems to look thinner than ever and now wears glasses all the time. (T.S.R. 47. 2 P.M. 55. S.S. 50.)

Nov. 30. Wednes. This has been an uncommonly cold month. There have been seventeen frosty mornings. Received a letter from Ada. Horace Hammond and Lilla called this morning, after which Horace departed for Oakland. Lilla has had a very bad spell of asthma and is out again on her wheel for the first time today. (T.S.R. 37. 2 P.M. 56. S.S. 50.)

Dec. 5. Monday. The weather continues a little cloudy. Father came with a letter from Cousin Sarah Hammond of Carver, Mass. telling of her mother's feeble health. She has not walked a step for two years, is almost blind and has bad cough. Yet she lives on, although she is nearly ninety years old. Sarah is the only daughter who is constantly with her, but her sisters come and help with the care of her. (T.S.R. 30. 2 P.M. 55. S.S. 50.)

Dec. 7. Wednes. Received a letter from Ada and wrote to Lizzie McLellan Lou came home today from Stockton, where she has been since last Friday with her father. He is so feeble and sometimes almost helpless that they do not like to have him stay alone. He cannot seem to fired a house keeper to suit him since alma's death. He has rheumatic trouble. (T.S.R. 35. 2 P.M. 58. S.S. 50.)

Dec. 8. Thursday. This evening a high wind rose suddenly and increased to a gale almost a cyclone. It blew from the northeast and very