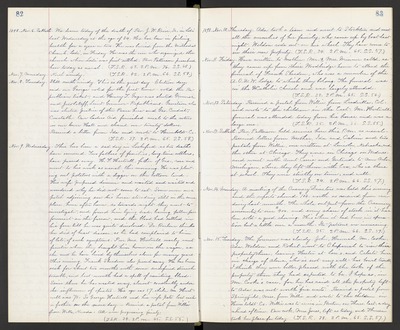 Nov. 8. Tuesday. Still north windy. This is the great day - Election day, and our George voted for the first time - voted the Republican ticket, and Henry T. Gage was elected Governor and Jacob Neff, Lieut. Governor - Republicans. Garretson also was elected Justice of the Peace here and Geo. Condict, Constable. Our Ladies Aid furnished meals to the voters in our lower Hall and cleared over twenty dollars. Received a letter from Ida and wrote to Humboldt Co. (T.S.R. 37. 2 P.M. 65. S.S. 58.)

Nov. 9. Wednesday. This has been a sad day in Lockeford, as two deaths have occurred. Two fathers of families, long-time settlers, have passed away. H.F. Hartwell, father of Geo., rose and went to his work as usual this morning. He was plowing out potatoes with a digger on the bottom land. His wife prepared dinner and waited and waited and wondered why he did not come to eat. Some men on a patch adjoining saw his horse standing still in the same place, hour after hour, so towards night they went to investigate, and found him lying dead, having fallen face foremost in the furrow, and the blood had settled in his face till he was quite discolored. Dr. Barbour thinks he died of heart disease, as he had complained to him of late, of such symptoms. Poor Mrs. Hartwell nearly went frantic when they brought him home in the wagon, as she and he have lived by themselves alone for many years. This evening, Frank Sherden also passed away. He has been sick for about two months with some undefined stomach trouble, and last month had spell of vomiting blood. Since then he has wasted away, almost constantly under the influence of opiates. His age was 57, while Mr. Hartwell was 75. So George Hartwell and his wife Kate lost each a father on the same day. - Received a postal from Willie from Wells, Nevada. All were progressing finely. (T.S.R. 34. 2 P.M. S.S. 55.)

Nov. 11. Friday. Have written to Mother. Mr. & Mrs. Minner called, as they came up from their Woodbridge home to attend the funeral of Frank Sherden, who was a member of the A.O.W.W Lodge to which they belong. The funeral was in the Catholic Church and was largely attended. (T.S.R. 33. 2 P.M. 65. S.S. 56.)

Nov. 13. Sabbath. Rev. Patterson held services here this P.M. as usual. Received letters from Mother. Ida and Calvin and two postals from Willie, one written at Lincoln, Nebraska, and the other at Chicago. They were in Chicago on Wednes. and went with Aunt Carrie and Gertrude to Ann Arbor Michigan, where they left them with Eva, who is there at school. They were strictly on time, and well. (T.S.R. 34. 2 P.M. 66. S.S. 57.)

Nov. 14. Monday. A meeting of the Creamery Directors was held this evening and the reports showed $104. worth as received from our dairy last month. The whole output from the Creamery amounted to over $400. and every share of stock in it has been sold - a good showing. This when it had been in operation but a little over a month. Its patrons are increasing. (T.S.R. 35. 2 P.M. 66. S.S. 59.)

Nov. 15. Tuesday. The forenoon was cloudy. John, Hannah, Mr. Cooke, Ada, Weldon and Robert went to Chaparral to view their property there, leaving Hester at Lori's, and Celeste here in charge of Alma, who is not very well - has bowel trouble. I think they were better pleased with the looks of the property than they had expected to be. I hope so, in Mr. Cooke's case, for he has said all the property left to Ada was not worth "five cents." Received a postal from Springfield, Mass. from Willie and wrote to the children in Humboldt Co. Willie was to arrive in Boston on Thurs. last, a day ahead of time. Our cook, Mrs. Jones, left us today, and Theresa took her place for today. (T.S.R. 38. 2 P.M. 65. S.S. 57.)