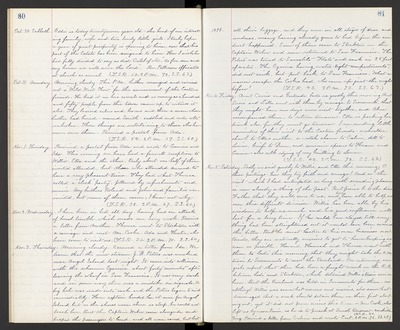 Oct. 30. Sabbath. Eddie is today twentyseven years old - the head of an interesting family, wife and two lovely little girls. I truly hope a year of great prosperity is opening to him, now that his part of the Estate has been assigned to him. How I wish he had fully decided to say as did Caleb of old, "As for me and my house we will serve the Lord." Rev. Patterson officiated at church as usual. (T.S.R. 50. 2 P.M. 72. S.S. 63.)

Oct. 31. Monday. Morning cloudy. This P.M. Luther arranged and carried out a "Wild West Show" for the amusement of the Eastern friends. He had it in his corrals and as many as a hundred and fifty people from the town came up to witness it also. They lassoed calves and horses and then a man whom Luther had hired - named Smith - saddled and rode colts unbroken. These things are entertaining to those who have never seen them. Received a postal from Ada. (T.S.R. 54. 2 P.M. 67. S.S. 60.)

Nov. 1. Tuesday. Received a postal from Ada and wrote to Eunice and Ida. This evening we have had a farewell reception to Willie, Etta and the others. Only about one-half of those invited attended, but those who attended seemed to have a very pleasant time. They had what Theresa called a "clock" party, followed by refreshments and music. My brothers Roland and John and families were invited, but none of them came, I know not why. (T.S.R. 38. 2 P.M. 67. S.S. 60.)

Nov. 3. Thursday. Morning cloudy. Received a letter from Ida. We learn that the river steamer J.D. Peters was wrecked near Angel Island last night. It came into collision with the schooner Czarina, about forty minutes after leaving the wharf in San Francisco. It was very dark and in some way there was a mistake in signals. A big hole was made into each and the Peters began to sink immediately. Her captain headed her at once for Angel Island, but as the shores were there so steep, he could not beach her. But the Captain Weber came alongside and helped the passengers to land, and all were saved, but lost

1898. all their baggage, and they were in all stages of dress and undress, many having already gone to bed before the accident happened. Some of them came to Stockton on the Captain Weber and some returned to San Francisco. The Peters was towed to Sansalito Flats and sank in 25 feet of water. The Czarina having water - tight compartments, did not sink, but put back to San Francisco. What a narrow escape the Cookes had, who came up just the night before! (T.S.R. 43. 2 P.M. 73. S.S. 63.)

Nov. 4. Friday. Aunt Carrie and Gertrude bade us goodby this morning. Aunt Susie and Lilla went with them by carriage to Sacramento, that they might have one day's more visit together, and Alice accompanied them, to return tomorrow. Etta is packing her trunk also, for they must go tomorrow. I am sending little reminders of their visit to the Eastern friends - a shoulder shawl to Etta's mother, a watch charm to Calvin, doll to Louise, knife to Dean, and souvenir spoons to Horace and Eunice - also silk edging of my knitting to Louise. (T.S.R. 42. 2 P.M. 72. S.S. 63.)

Nov. 5. Saturday. Sadly we said goodby to Willie and Etta this morning. O these partings how they try faith and courage! And so the visit which I had anticipated so long with exceeding pleasure is now already a thing of the past. But praise be to the dear Father that they could come to us, and have been able to help us over this difficult division. Willie has been able by his wisdom to help us much and his good influence will last for a long time. If he could have stayed till everything had been straightened out, it would have been so much the better. But he must hasten to his own business now. Besides, they are naturally anxious to get to housekeeping as soon as possible. Howard, Hannah and Theresa went with them to Lodi this morning, that they might take the A.M. train to Sacramento to meet the Overland. On returning, our girls report that there had been a freight wreck on the R.R. between Lodi and Stockton, which detained Willie's train over an hour. But the Overland was held in Sacramento for them, so although Willie was somewhat nervous and anxious, also somewhat discouraged that a wreck should detain them on their first starting out, yet it did not prove serious this time. - Mr. Cooke also left us by noon train, as he is to preach at Sunol tomorrow - candidating. Received a letter from Calvin and wrote East. (T.S.R. 44. 2 P.M. 76. S.S. 69.)