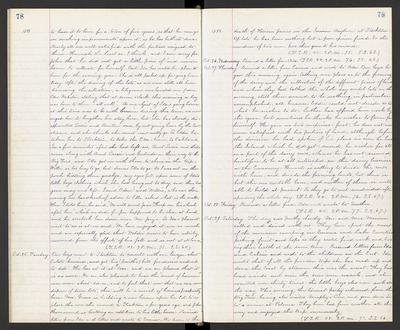 1898. to lease it to him for a term of five years, so that he can go on making improvements upon it, as he has hitherto done. Nearly all are well satisfied with the portions assigned to them - Hannah the least so, I think, and I am sorry for John that he did not get a little piece of land nearer home to cultivate for himself. But Ida has rented her place to him for the ensuing year. She is all packed up for going home today. After the drawing of the lots, as we were still all here discussing the situation, a telegram was handed me from Edw. Webster, stating that at seven o'clock this morning a boy was born to them - "all well". As one object of Ida's going home at this time was to be with Eunice during this time, we now urged her to lengthen her stay here, but she has already disappointed Susie and Benton once, by not going home by the last steamer, and she thinks she must now really go. So Eddie has taken her to Stockton, to take the P.M. train to Oakland. In a few minutes after she had left us, Aunt Susie and Lilla came along with Aunt Carrie and Gertrude on their way to the Big Trees, and Etta got in with them, to share in the trip. Willie is too busy to go, but desires Etta to go. As I was out on the porch bidding them goodbye, my eyes fell upon some of Ida's little boys' clothing which she had hung out to dry, and then had gone away and left. I said "O dear"! and Willie, who was there waving his handkerchief adieu to Etta, asked what is the matter. When I told him, he said, "We will send Jim Thorp on his wheel after her," which we did, for Jim happened to be close at hand, and he overtook her down near Mr. Jory's. So Ida's pleasant visit to us is at in end. We have enjoyed it ever-so-much and are especially glad that Webster seems to have entirely recovered from the effects of his fall and is not at all lame. (T.S.R. 42. 2 P.M. 71. S.S. 60.)

Oct. 25. Tuesday. Our boys went to Stockton to consult with our lawyer about Estate business, and get his (Smith's) bill for services rendered to date. He has set it at $1000. and we are pleased that it is no more. We are also pleased to hear the "sound of hammers" once more about town, and to feel that now that we can soon dispose of town lots, there will be a revival of business prosperity here. Mrs. Green is building a new house upon her lot, to replace the one she moved to Stockton a few years ago, and John Hammond is building an addition to his little house. Received letters from Ida and Etta and wrote to Eunice. We learn of the

Oct. 27. Thursday. Received a letter from Eunice and wrote to Ada. Our boys began this morning again, talking over plans as to the farming of the dairy and the cultivation of the different pieces of land and when they had talked the whole day until late in the evening, still there seemed to be nothing in particular accomplished, all because Eddie could not decide as to what he wishes to do. Luther has offered him work by the year, but sometimes he thinks he wishes to farm for himself. He gave us two surprises - first, he does not now seem satisfied with his portion of land, although before the division he had spoken of his plans in case he had the Island, which he did get: second, he wishes for all or a part of the dairy cows, whereas he has not seemed heretofore to be at all interested in the dairy business, or the Creamery. Howard is willing to divide the cows with him, and divide the farming lands, but there is but the one suitable barn, and neither of them is well able to build at present. So they go to rest undecided after spending the whole day. (T.S.R. 44. 2 P.M. 76. S.S. 67.)

Oct. 29. Saturday. The day was partly cloudy. Mr. and Mrs. Minner called and dined with us. They have spent the most of the summer camping in Sonoma and Lake Countries picking fruit and hops as they could find work and helping their health at the same time. Received letters from Ida and Calvin and wrote to the children in the East. Ida writes that of all the fourteen trips she has made up and down the Coast by steamer, this was the worst. They had head winds and even the crew were seasick, and she vomited over thirty times - the little boys also were sick all the way. This evening, the tourist party returned from the Big Trees, having also visited Murphy's Cave and gone down in to a mine at Paloma. They have had fine weather all the way and enjoyed the trip immensely. (T.S.R. 48. 2 P.M. 77. S.S. 66.)