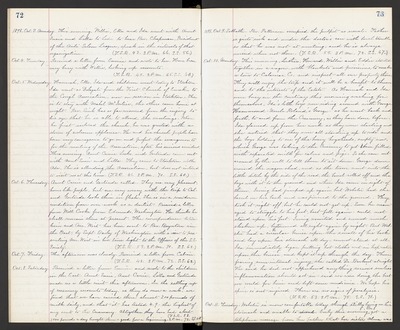 Oct. 5. Wednesday. Hannah, Etta, Ida and children went today to Stockton. Ida went as Delegate from the First Church of Eureka to the Cong'l Association, now in session in Stockton. She is to stay with Mabel McIntire, the others came home at night. Rev. Sink has so far recovered from the injury to his eye that he is able to attend the meetings. When he first entered the church, he was greeted with a storm of welcome applause. He and his church people have been very courageous to go on and perfect the arrangements for the meeting of the Association, after his serious accident. This evening, Aunt Carrie Locke and Gertrude came out with Aunt Susie and Lilla. They came to Stockton with Ada. She is attending the Association, but does not intend to visit us at this time. (T.S.R. 41. 2 P.M. 70. S.S. 60.)

Oct. 6. Thursday. Aunt Carrie and Gertrude called. They are very pleasant, home like people, but are very weary with the trip to Cal. and Gertrude looks thin in flesh. She is in a run down condition from over - work as a dentist. Received a letter from Will Cooke from Edmonds, Washington. He thinks he shall remain there at present. The correspondence between him and Mr. Wirt has been sent to Rev. Boynton in the East, by Supt. Bailey of Washington with a view to presenting Mr. Wirt in his true light to the officers of the S.S. Society. (T.S.R. 53. 2 P.M. 70. S.S. 62.)

Oct. 8. Saturday. Received a letter from Eunice and wrote to the children in the East. Aunt Susie, Aunt Carrie, Lilla and Gertrude made us a little visit this afternoon. In the settling up of creamery accounts today, as they do once a week, we find that we have carried there almost 300 pounds of milk daily, and that it has tested 4.9 - the highest of any sent to the Creamery. Altogether they have had about 1000 pounds a day brought stone - good for a beginning (T.S.R. 53. 2 P.M. 72. S.S. 65.)

Oct. 10. Monday. This morning, Luther, Howard, Willie and Eddie started together in a wagon, with blankets and provisions, to make a tour to Calaveras Co. and inspect all our property there. They will enjoy the trip and it will be a benefit to them and to the interests of the Estate. As Hannah and Ida were busy in the courtway this morning washing for themselves, Ida's little boys were riding around with George Hammond - Uncle Roland's George - as he went back and forth, to and from the Creamery, as they have done before. Ida glanced up from her work as they were starting and she noticed that they were all standing up to ride and the boys holding to one of the heavy hogsheads, empty now, which George was taking to the Creamery to get them filled with separated milk for calves and pigs. So she ran out around by the well to tell them to sit down. George drove around the wagon shed, and as the team went into the little ditch by the side of the road, the barrel rolled off and the boys with it to the ground and when Ida came in sight of them, Irving had jumped up again but Webster had the barrel on his back and was pinned to the ground. They took it right off, but he could not get up. Soon he managed to struggle to his feet, but fell again - could not stand upon his feet. Irving vomited and seemed much shaken up, but seemed all right again by night. But Webster had a circular bruise upon the small of his back and lay upon his stomach all day - cannot stand at all. Ida immediately began putting hot cloths wet in hop water upon the bruise, and kept it up through the day. Then fearing some internal injury, she called Dr. Barbout at night. He said he did not apprehend anything serious unless inflammation should set in - said we were doing the best we could for him and left some medicine. We hope his spine is not injured. There are no signs of paralysis. (T.S.R. 53. 2 P.M. 75. S.S. 71.)

Oct. 11. Tuesday. Webster is more comfortable today, though still lying on his stomach and unable to stand. Early this morning Lou got a telephone message from her Father that her sister Alma was