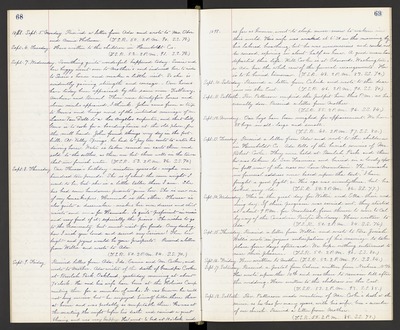 Sept. 7. Wednesday. Something quite wonderful happened today. Susie and her buggy went over to Mother's and induced her to ride to Susie's house and make a little visit. So she is evidently gaining strength and courage. - Our horses have today been appraised by the same men - Tretheway, Ambrose and Bruml. There were twenty five horses and eleven mules appraised, I think, John came from a trip to Greve's and brings word of the intended marriage of Mrs. Laura Van Dell to a Los Angeles carpenter, and that - Lilly Greve is to cook for a boarding house at the old place, for the mill hands. John found things very dry in the foothills. At Valley Springs, he had to pay ten cents to water his driving horse. Water is taken round in carts there and sold to the settlers, as there are but three wells in the town that now furnish water. (T.S.R. 53. 2 P.M. 86. S.S. 70.)

Sept. 8. Thursday. Our Theresa's birthday - nineteen years old - weighs one hundred ten pounds. She is of about the same weight I used to be, but she is a little taller than I am. She has had some handsome presents given her. She is now one of my housekeepers, Hannah is the other. Theresa is also quite a dressmaker - makes her own dresses and shirt waists and some for Hannah. Is quite proficient in music and very fond of it, especially the piano. She wishes to go to the University, but must wait for funds. O my darling, how I wish you loved and served my Saviour! Then how bright - and joyous would be your prospects. Received a letter from Willie and wrote to Ada. (T.S.R. 50. 2 P.M. 84. S.S. 70.)

Sept. 9. Friday. Received letters from Ada, Ida, Eunice and Mr. Cooke, and wrote to Mother. Ada writes of the death of Grandpa Cooke at Benlah Park, Oakland, yesterday morning at about 7 o'clock. He and his wife have been at the Holiness Camp meeting there for a number of weeks. It was known he could not long survive, but he enjoyed himself better there than at home and was probably as comfortable there. He was at the meeting the night before his death and received a great blessing and was very happy. He went to bed at 10 o'clock and

1898. as far as known, went to sleep never - more to waken in this world. His wife was awaked at 6:30 in the morning by his labored breathing, but he was unconscious and could not be roused, expiring in about half an hour. A good man has departed this life. Will Cooke is at Edmonds, Washington, so Ada has the whole care of the funeral arrangements. He is to be buried tomorrow. (T.S.R. 48. 2 P.M. 83. S.S. 72.)

Sept. 13.Tuesday. Received a letter from Ada and wrote to the children in Humboldt Co. Ada tells of the burial services of Mr. Robert Cooke. They were held at Benlah Park and then he was taken to San Francisco and buried in a lovely spot in full view of the cross on Lone Mountain. The remarks in funeral address were based upon the text, "I have fought a good fight," &.c. His age was seventythree, but he looked very old. (T.S.R. 54. 2 P.M. 86. S.S. 77.)

Sept. 15. Thursday. Received a letter from Willie and wrote to Bro. Josiah. Willie wrote in joyous anticipation of his marriage to take place four days afterward. We hope nothing intervened to mar their pleasure. (T.S.R. 50. 2 P.M. 90. S.S. 80.)