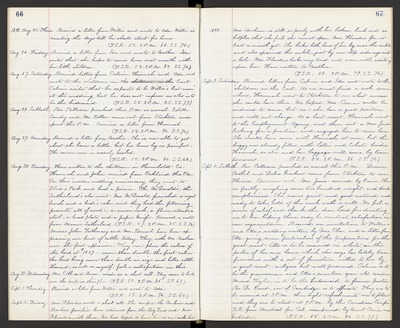 Aug. 30.Tuesday. Have written to the children in Humboldt Co. Hannah and John arrived from Oakland this P.M. On their "wooden wedding" anniversary they went to Blair's Park, and had a picnic. The McDonald's, the Sutherland's also went. Mrs. McDonald furnished a royal lunch and a bride's cake, and they had the following presents, all of wood: - a music rack, a flower stand, a stool, a bread plate and a paper knife. Received a note from Mamie Sutherland. (T.S.R. 47. 2 P.M. 85. S.S. 76.) Messrs. John Tretheway and Mr. Bruml have been appraising our herd of cattle today. They, with Mr. Ambrose were the first appraisers. They now place the value of the herd at $1837. - more than double the first value - the herd being more than double in size and better cattle. Howard, as well as myself, feels a satisfaction in this.

Sept.2. Friday. Mrs. Flanders made a short call. The campers - the Ambrose and Barbour families - have returned from the Big Trees and Mrs. Flanders with them. We had hoped to have her as our cook but

1898. Mrs. Ambrose is still so poorly with her broken limb and so helpless, that she feels she cannot spare Mrs. Flanders for, at least a month yet. she broke both bones of her leg near the ankle and also sprained the ankle, just by one step sideways into a hole. Mrs. Flanders looks very tired and worn with waiting upon her. Have written to Mother. (T.S.R. 48. 2 P.M. 79. S.S. 76.)

Sept. 3. Saturday. Received letters from Calvin and Ida and wrote to the children in the East. As we must find a cook somewhere, Hannah went to Stockton to see what success she could have there. We hoped Mrs. Craven could be induced to come, but no - she has a good position and will not change. As a last resort. Hannah went to the employment Agency, and there met a Mrs. Jones looking for a position, and engaged her to come here. She would have come with Hannah at once, but the buggy was already filled with Lottie and Celeste besides Hannah, so she and her baggage will come by train tomorrow. (T.S.R. 50. 2 P.M. 88. S.S. 78.)

Sept. 4. Sabbath. Rev. Patterson preached as usual this P.M. Dessie Bethel and Delia Gnekow came from Stockton to see Theresa. Our new cook - Mrs. Jones - arrived by train. She is portly, weighing some two hundred weight, and dark complexioned. She seems quiet and good natured and ready to take hold of the work with a will. We feel a sense of relief, and thank the dear Lord for directing us to her, hoping there may be mutual satisfaction in our acquaintance. Received an invitation to Willie's and Etta's wedding written by Mrs. Ober, and a letter from Etta, giving some particulars of the preparation for the great event. Etta is to be married in white, in the parlor of her own home which she says has lately been furnished with a set of furniture willed to her by a great aunt - antique but well preserved. Calvin is to be the groomsman and Etta's seventeen-year-old cousin Maud Taylor, is to be the bridesmaid. A former pastor - Rev. Dr. Beard, now of Cambridge, is to officiate. They are to be married at 3 P.M. - then light refreshments are to follow and they are to start at 9 P.M. by the Canadian Pacific R.R. from Montreal for Cal. accompanied by Aunt Carrie and Gertrude. (T.S.R. 55. 2 P.M. 90. S.S. 77.)