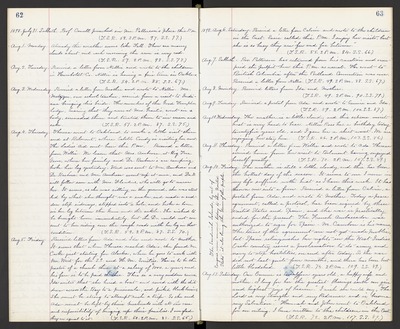 Aug. 3. Wednesday. Received a letter from Mother and wrote to Nellie. Mr. Metyger, our school teacher, arrived from a visit to Indiana bringing his bride. The members of the Good Templar Lodge, hearing that they were at Mrs. Grant's, went in a body, serenaded them and treated them to ice cream and cake. (T.S.R. 51. 2 P.M. 87. S.S. 75.)

Aug. 4. Thursday. Theresa went to Oakland to make a little visit there and at Belmont, where Estelle Condy is visiting her aunt. The Ladies Aid met here this P.M. Received a letter from Willie. We learn that Mrs. Ambrose, at Big Tree Grove, where her family and Dr. Barbour's are camping, broke her leg yesterday. Word was sent to Mr. Ambrose and Dr. Barbour, and Mr. Ambrose went up at once, and Dr. B. will follow soon with Mrs. Flanders, who will go to nurse her. It seems, as she was sitting on the ground, she was startled by what she thought was a snake, and made a sudden step sideways, stepped into a hole, and broke a bone in her leg between the knee and the ankle. She wished to be brought home immediately, but the Dr. would not consent to her riding over the rough roads with her leg in that condition. (T.S.R. 52. 2 P.M. 87. S.S. 70.)

Aug. 5. Friday. Received letters from Ada and Ida and wrote to Mother. It seems that when Theresa reached Ada's, she found Mr. Cooke just starting for Alaska, where he goes to work with Mr. Wirt for the S.S. and H.M. Societies. He is to be the pastor of a church there at a salary of $1000. a year, and his fare is to be paid thither. This is a very sudden move. Ida writes that she hired a boat and rowed with the children across the Bay to a peninsula, and picked black berries. She must be strong to attempt such a trip. So she and Ada must be left by their husbands with all the care and responsibility of bringing up their families. I am glad they are equal to it. (T.S.R. 50. 2 P.M. 81. S.S. 65.)

Aug. 7 Sabbath. Rev. Patterson has returned from his vacation and occupied the pulpit here this P.M. as usual. He went to British Columbia after the Portland Convention was over. Received a letter from Nellie. (T.S.R. 49. 2 P.M. 88. S.S. 67.)

Aug. 12. Friday. The weather is still a little cloudy, and this has been the hottest day of the season. It seems to me I never in my life suffered with heat as I have this week. It has thrown me into a fever. Received a letter from Calvin, a postal from Ada, and wrote to Mother. Today a peace agreement, called a protocol, has been signed by these United States and Spain, and the war is practically ended for the present. The French Ambassador was authorized to sigh for Spain. M. Cambon is his name. The terms of the agreement are not yet made public, but Spain relinquishes her rights in the West Indies. Each country issues a proclamation to its army and navy to stop hostilities, on and after today. So the war did not last quite four months, and there has been but little bloodshed. (T.S.R. 74. 2 P.M. 109. S.S. 89.)

The Sandwich Islands, by act of Congress, were annexed today to the United States - it also being the desire of the people.

Aug. 13. Saturday. Our Eunice is twentyfour years old, a happy wife and mother. I long for her "the greatest blessings earth can give and highest joys of heaven." I wish she could say "The Lord is my Strength and my Redeemer and is become my Salvation." Hannah and John went to Oakland for an outing. I have written to the children in the East. (T.S.R. 72. 2 P.M. 107. S.S. 89.)