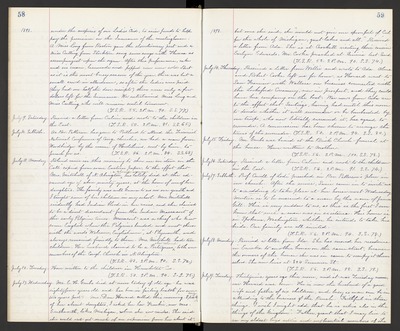 1898. under the auspices of our Ladies Aid, to raise funds to help pay the premium on the Insurance of the meeting house, A Miss Long from Boston gave the elocutionary part and a Miss Cutting from Stockton sang some songs with Theresa as accompanyist upon the organ. After this performance, cake and ice cream, lemonade and popped corn were sold But as it is the most busy season of the year, there was but a small crowd in attendance, so after the ladies were paid (they had one-half the door receipts) there were only a few dollars left for the Insurance. We entertained Miss Long and Miss Cutting, who will remain until tomorrow. (T.S.R. 55. 2 P.M. 90. S.S. 77.)

July 11. Monday. Roland came in this morning to show me an item in the "Call" copied from some Eastern paper, to the effect that Mrs. Mitchell of N. Abington a colored woman has lately died at the advanced age of above ninety years, at the home of one of her daughters. The family was well known to us in our youth and I taught some of her children in my school. Mrs. Mitchell evidently had Indian blood in her veins, and she claimed to be a direct descendant from the Indian Massasoit of the early Pilgrim times. Massasoit was a chief who know some English when the Pilgrims landed and met them with the words "Welcome, Englishmen", at Plymouth, and always remained friendly to them. Mrs. Mitchell had ten children. Her husband claimed to be a Portuguese also colored - both were members of the Congl. Church in N. Abington. (T.S.R. 48. 2 P.M. 90. S.S. 72.)

July 13. Wednesday. Mr. E. H. Grubs died at noon today of old age - he was eightyfour years old and has been in failing health for some two years past. Mrs. Dan Howard called this morning speaking of her absent daughters, I asked her how Frankie, now Mrs. Southworth, likes Michigan, where she now resides. She said she could not get much of an expression from her about it.

July 14. Thursday. Received a letter from Willie and wrote to Ada. Alma and Robert Cooke left us for home, as Howard went to San Francisco with Wallace on business connected with the Lockeford Creamery, now in prospect, and they could have his company on the boat. War news from Cuba are to the effect that Santiago, having had until this noon to decide whether it will surrender or be bombarded by our troops, who now literally surround it, has agreed to surrender. A commission has been chosen to arrange the terms of the surrender. (T.S.R. 50. 2 P.M. 94. S.S. 80.)

July 17. Sabbath. Prof. Cowell of Lodi preached in Rev. Patterson's place in our church. After the service, Susie came in to invite us to a weeding to take place at her house next Wednesday. Mertice is to be married to a man by the name of James Gill. This is very sudden to us, as this is the first I ever knew that such a man was in existence. His home is in Spokane, Washington, whether he intends to take his bride. Our family are all invited. (T.S.R. 56. 2 P.M. 94. S.S. 78.)

July 19.Tuesday. Thirtynine years ago this noon, and it was Tuesday noon, our Howard was born. He is now the husband of a good wife and father of six children, and busy as man can be in attending to the business of the Ranch. Faithful in these things, I wish I might add that he is active also in the "things of the kingdom." Father, grant that I may live to see my eldest boys active and influential members of the