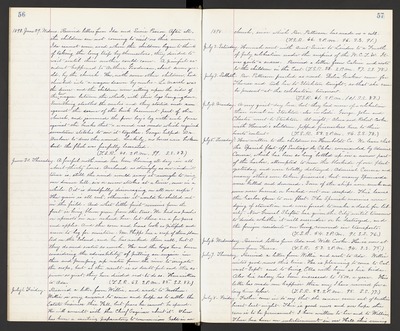 1898. June 29. Wednes. Received letters from Ida and Susie Pascoe. After all, the children are not coming to visit us this summer. Ida cannot come, and when the children began to think of taking the long trip by themselves, they decided to wait until their mother could come. A painful accident happened to Arthur Goodman, about seven yrs - old, by the church. He, with some other children, had climbed into a wagon drawn by mules - Le Marsh was the driver - and the children were sitting upon the side of the low wagon between the wheels, with their legs hanging down. Something startled the mules and they started and ran against the corner of the brick basement part of the church, and jammed the poor boy's leg with such force against the bricks that a wound was made which required seventeen stitches to sew it together. George helped Dr. Barbour to dress the wound. Luckily, no bones were broken but the flesh was fearfully lacerated. (T.S.R. 60. 2 P.M 99. S.S. 83.)

June 30. Thursday. A fearful north wind has been blowing all day-in all about thirty hours. Anchored as strongly as our windmill tower is, still the wind would sway it enough to ring our dinner bell, six or seven strokes at a time, once in a while. O it is dreadfully discouraging on all our crops! The grain is all cut, otherwise it would be shelled out in the field. And what little fruit remains from the frost is being blown green from the trees. We had no peaches or apricots in our orchard here, but there are a few pears and apples. And the corn and beans look so pitiful and seem to beg for moisture. Mr. Phipps has a crop of them planted on the Island, and he has worked them well, but O they do need water so much. He and the boys have been considering the advisability of putting an engine in then and jumping up water from the river to irrigate the crops, but as the result is so doubtful and the expense so great, they have decided not to do so. Have written to Ada. (T.S.R. 63. 2 P.M. 85. S.S. 83.)

July 1. Friday. Received a letter from Willie, and wrote to Mother. Willie is very anxious to come and help us to settle the Estate business this Fall, but fears he cannot be spared. He will consult with the Chief Engineer about it. There has been a meeting preparatory to communion held in our

July 2. Saturday. Hannah went with Aunt Susie to Linden to a Fourth of July celebration under the auspices of the W.C.T.W. It was quite a success. Received a letter from Calvin and wrote to the children in the East. (T.S.R. 58. 2 P.M. 97. S.S. 78.)

July 4. Monday. A very quiet day Lure, but they had more of a celebration than usual in Stockton also in Lodi. George, John and Chester went to Stockton. At night, Alma and Robert Cooke with Howard's children, popped firecrackers here to their hearts content. (T.S.R. 58. 2 P.M. 96. S.S. 78.)

July 5. Tuesday. Have written to the children in Humboldt Co. We learn that the Spanish fleet off Santiago de Cuba, commanded by Admiral Cervera, which has been so long "bottled up" in a narrow part of the harbor, attempted to run the blockade of our fleet yesterday and were totally destroyed. Admiral Cervera and many others were taken prisoners, but many Spaniards were killed and drowned. Some of the ships were sunk and some were burned or beached-not-one escaped. This leaves the harbor open to our fleet. The Spanish marines were dying of starvation and were forced to make a dash for liberty. Now General Shafter has given the City until tomorrow to decide whether it will surrender or be destroyed, and the foreign residents are being removed in transports. (T.S.R. 54. 2 P.M. 91. S.S. 76.)

July 7. Thursday. Received a letter from Willie and wrote to Ada. Willie writes good news this time. He is planning to come to Cal. next Sept. and to bring Etta with him as his bride. Also his salary has been increased to $1500. a year. His letter has made me happier than any I have received for a long time before. (T.S.R. 52. 2 P.M. 95. S.S. 77.)

July 8. Friday. Father came in to say that the cancer came out of mother's breast last night. This is good news and we hope the cure is to be permanent. I have written to her and to Willie. There has been an entertainment in our Hall this evening