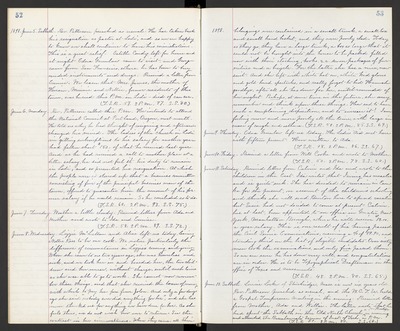 1898. June 5. Sabbath. Rev. Patterson preached as usual. He has taken back his resignation as pastor at Lodi, and so we are happy to know we shall continue to have his ministrations. This is a great relief. Estelle Condy left for home and at night Edna Greenlaw came to visit, and George came from San Francisco, where he has been to buy needed instruments and drugs. Received a letter from Eunice. We learn that Mrs. James, the mother of Hiram, Minnie and Nellie, former residents of this town, was buried this P.M. in Lodi - died of cancer. (T.S.R. 57. 2 P.M. 97. S.S. 80.)

June 6. Monday. Rev. Patterson called this P.M. He intends to attend the National Council at Portland, Oregon, next month. He told us why he had thought of resigning and afterwards changed his mind. The ladies of the church in Lodi in getting subscriptions to his salary for another year had fallen short $150. of what he received last year. And as he had received a call to another place at a better salary, he did not feel it his duty to remain in Lodi, and so presented his resignation. At which the people were so stirred up that a business committee consisting of five of the principal business men of the town, offered to guarantee him the amount of his former salary if he would remain. So he concluded so to do. (T.S.R. 60. 2 P.M. 93. S.S. 75.)

June 8. Wednesday. Lizzie Mclellan and Alice left us today, Leaving Nettie Ross to be our cook. We notice particularly the difference of circumstances in Lizzie's coming and going. When she came to us two years ago, she was homeless and sick , and we took her in and boarded her, the two children and her nurse, without charge, until such time as she was able to go to work. She cannot now remember these things, and that she received the loan of money with which to pay her fare from Jolon, and only a few days ago she said "nobody ever did anything for her," and she has never thanked us for anything we have done for her. As she feels thus, we do not wish her ever to return. See the contrast in her circumstance. When they came, all their

1898. belongings were contained in a small trunk, a small box and small hand basket, and they were poorly clad. Today as they go they have a large trunk, a box so large that it could not be brought into the house to be packed filled now with their clothing, books, &c, seven packages of furniture and a bicycle. For the latter she has nice, new suit. And she left with white hot on, white kid gloves and gold bowed spectacles, and really forgot to bid Hannah goodbye, after all she has done for her, until reminded of her neglect. Perhaps, at some time in the future, she may remember and think upon these things. How sad to have such a complaining disposition, and to increase it! I am feeling more and more poorly all the time, with large increase of cough and asthma. (T.S.R. 50. 2 P.M. 85. S.S. 69.)

June 11. Saturday. Received letters from Calvin and Ida and wrote to the children in the East. Ida writes that Irving has measles and is quite sick. She has decided to remain in Eureka for the present, on account of the children's schooling and thinks she will send Benton here to spend vacation but Susie had not decided to come at present. Calvin, has at last, been appointed to an office in Greater New York, Manhattan Borough, where he will receive $1200. a year salary. This is one result of his having passed the Civil Service Examinations, receiving a % of 89.90, and standing third on the list of eligible candidates. Over sixty men took the examinations, and only five passed them. So we are sure he has done very well, and congratulations are in order. He is to be Topographical Draftsman in the office of Taxes and Assessments. (T.S.R. 48. 2 P.M. 80. S.S. 65.)

June 12. Sabbath. Louise Locke of Sturbridge, Mass is now six years old. Rev. Patterson preached as usual, and the W.C.T.U. held a Gospel Temperance Meeting in the evening. Received letters from mother, Ada and Willie . The latter wrote that he had spent the Sabbath in the "Old North Church" in Boston in morning and attended the Baccalaureate Sermon of Inst. of Tech. in P.M. (T.S.R. 50. 2 P.M. 80. S.S. 64.)