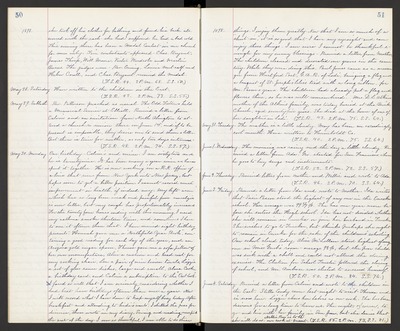 1898. she took off his clothes for bathing and found his back all covered with the rash she had supposed he had bed cold. This evening there has been a Medal Contest in our church for men only. Five contestants appeared. Chas. Bryant, James Thorp, Will. Moore, Victor Wardrobe and Martin Burns. The judges were Rev. Ewing, Louise Metcalf and Helen Corell, and Chas. Bryant received the medal. (T.S.R. 44. 2 P.M. 68. S.S. 50.)

May 29. Sabbath. Rev. Patterson preached as usual. The Odd Fellows held a Memorial service at Elliott. Received a letter from Calvin and an invitation from North Abington to attend a church re-union there on June 1st, and if to be present is impossible, they desire me to send them a letter. But there is time for neither, as only two days intervene. (T.S.R. 48. 2 P.M. 74. S.S. 57.)

May 30. Monday Our birthday Calvin's and mine. I am sixtytwo and he is twentynine. It has been many a year since we have spent it together. He is now working in a R.R. office of a line that runs from New York into New Jersey, but hopes soon to get a better position, I cannot record much improvement in health, if indeed any. My left arm which has so long been weak and painful from neuralgia is now better, but my cough has proportionately increased. For the twenty four hours ending with this morning. I used my asthma smoke thirteen times, and sometimes I have to use if oftener than that. I have received eight birthday presents. Hannah gave me a "Northfield Year Book," containing a good reading for each day of the year, and an Arizona gold sugar spoon, Theresa gave me a sofa pillow of her own manufacture, Alice a cushion and head rest for my rocking chair, Lou a pair of nice linen towels, Lizzie a set of glass sauce dishes, large and small, Alma Cooke a birthday card, and Calvin a subscription to the "Out Look". I forced so well that I am seriously considering whether I had best have birthdays oftener than once a year. Now I will record what I have done to keep myself busy today. After breakfast and attending to birdies wants, I shelled the peas for dinner, then wrote in my diary. Sewing and reading occupied the rest of the day. I am so thankful I am able to do these

1898. things. I enjoy them greatly. Now that I am so much of a "shut in," it is so good that I have my eyesight and can enjoy these things. I am sure cannot be thankful enough for my many blessings. Received a letter from Mother. The children cleaned and decorated our graves in the cemetery. While they were doing this, Paul Jones came as a messenger from Hartford Post, G.A.R. of Lodi, bringing a flag and a bouquet of St. Joseph o lilies tied with a long ribbon , for Mr. Pascoe's grave. The children had already put flag and flowers there, so he was well remembered. Mrs. D.L. Atkins mother of the Atkins family, was today buried at the Brick Church, aged seventy five years. She died at the home of one of her daughters in Lodi. (T.S.R. 43. 2 P.M. 75. S.S. 60.)

June 3. Friday. Received a letter from Ida and wrote to mother. Ida writes that Susie Pascoe stood the highest of any one in the Eureka school. Her average was 99 5/7%. She has one year more before she enters the High school. Ida has not decided whether she will remain in Eureka or join her husband in Truckee She wishes to go to Truckee, but thinks perhaps she ought to remain in Eureka for the sake of the children's schooling. Our school close today, Alice McLellan stood highest of any one in Miss Grub's room average 98%, but the poor child was sick with a chill and could not attend the closing exercises. The Election for School Turstee followed the closing of school, and Mr. Ambrose was elected to succeed himself. (T.S.R. 50. 2 P.M. 84. S.S. 76.)

June 4. Saturday. Received a letter from Calvin and wrote to the children in the East. Stella Condy came last night to visit Theresa and is now here, Lizzie closes her labors as our cook. She has been desirous for a long time to leave us. She ought, of course, to go and live with her family in San Jose, but she denies that she will do so. Nettie Ross is to be our cook at present. (T.S.R. 55. 2 P.M. 93. S.S. 81.)