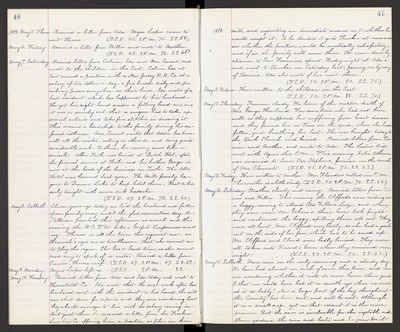 May 7. Saturday. Received letters from Calvin, Ida and Mrs. Smart, and wrote to the children in the East. Calvin has at last secured a position with a New Jersey R.R. Co. at a salary of two dollars a day, a free lunch daily, and free railway passes everywhere on their lines. Ida writes of a bad accident which has happened to her husband. He got his right hand under a falling band saw, and it was so severely cut that a surgeon had to take up several arteries and take five stitches in dressing it This means a hardship to the family during his enforced idleness. Mrs. Smart writes that Addie has been well all the winter, eating as others do, and doing quite considerable work. To them, her recovery seems like a miracle, Allen Towle was buried at Dutch Flat, after the funeral services at Towle, and his brother George is now at the head of the business in Towle. The Alta Hotel was burned last year. The Mills family have gone to Donner Lake to keep hotel there. Went to bed early tonight with severe sick headache. (T.S.R. 47. 2 P.M. 78. S.S. 68.)

May 8. Sabbath. Eleven years ago today we laid the husband and father of our family away until the glad resurrection day. Rev. Patterson preached this afternoon as usual and this evening the W.C.T.U. held a Gospel Temperance meeting. Theresa is all the time the organist now, as Hannah's eyes are so troublesome that she cannot see to play the organ. She has a hard time , as she cannot read any to speak of, or write. Received a letter from Eunice, Horace's wife (T.S.R. 47. 2 P.M. 87. S.S. 69.)

May 10. Tuesday. Received letters from Ada and Ida today and wrote to Humboldt Co. Ida wrote that the next week after her husband met with the accident to his hand, the mill was shut down for repairs, and they were wondering how they should manage to live with no salary coming in. But just then he received a letter from the Truckee Lumber Co. offering him a position as filer in their

1898. mill, and requesting an immediate answer as to whether he would accept it. So he decided to go to Truckee at once and see whether the position would be mutually satisfactory, and if so, the family will move there. He came down by steamer to San Francisco, spent Friday night at Ada's and went to Truckee on Saturday last, passing us by way of Benicia. Ada also wrote of his visit there. (T.S.R. 50. 2 P.M. 90. S.S. 75.)

May 12. Thursday. Forenoon cloudy. We learn of the sudden death of Mrs. George Howland. For some time she had not been well, as they supposed her suffering from heart disease, and they found her on Tues. in the yard, where she had fallen, just breathing her last. She was brought today to the Brick Church and buried . Received letters from Eunice and Mother and wrote to Ada. The Ladies Aid met with Agnes this P.M. This evening, Katie Athearn was married to Isaac Orr Stephens, foreman on the ranch of Mrs. Clements. (T.S.R. 45. 2 P.M. 72. S.S. 63.)

May 14. Saturday. Weather cloudy and rainy. Received letters from Calvin and Willie. This evening the Cliffords were riding in a buggy, coming to attend Odd Fellows Lodge, and when they were near Mr. Gehan's, their house took fright and overturned the buggy, spilling them all out. They were all hurt, Mrs. Clifford very badly, as she had a gash cut on the side of her face, which had to be sewed up. Mr. Clifford and Cloud were badly bruised. They were all taken into Howard's house where they remained over night (T.S.R. 50. 2 P.M. 72. S.S. 62.)

May 15. Sabbath. More rain in the early morning and a cloudy day. We have had almost an inch of rain this time, and we are wondering whether it will do more harm than good. O that we could have had it a month ago when we needed it so badly! Now a large part of the hay throughout the County has been cut, and will be wet. Although it is a small crop, yet on that account it is the more precious. But the rain is invaluable for the vegetable and flower gardens, the corn and beets, and I rejoice for it.