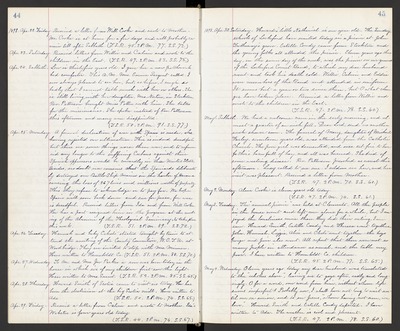 Apr. 24. Sabbath. Lou is thirtyfive years old. I gave her a new patchwork bed comforter. This A.M. Mrs. Emma Sargent called. I am always pleased to see her, but, as before, I cough so badly that I cannot talk much with her or others. She is still living with her daughter, Mrs. Norton, in Stockton. Rev. Patterson brought Miss Potter with him. She talks for the missionaries. She spoke instead of Rev. Patterson this afternoon and many were disappointed. (T.S.R. 50. 2 P.M. 91. S.S. 77.)

Apr. 25. Monday. A formal declaration of war with Spain is made, she having rejected our ultimatum. This is indeed dreadful but there are some things worse than war, and to refuse aid any longer to the suffering Cubans against their Spanish oppressors would be cowardly in these United States. Besides, no doubt now remains that the Spaniards deliberately destroyed our Battle-Ship Maine in the harbor of Havanna causing the loss of 267 lives and millions worth of property. This they refuse to acknowledge or to pay for. We hope Spain will soon back down and sue for peace, for war is dreadful. Received letters from Ida and from Will Cooke. He has a part assigned him in the program at the meeting of the alumni of the Theological Seminary, to take place with week. (T.S.R. 51. 2 P.M. 89. S.S. 72.)

1898. Apr. 30. Saturday. Howard's little Nathaniel is one year old. The Sunday schools of Lockeford have united today in a picnic at John Tretheway's grove. Estelle Condy came from Stockton and the young folks all attended the picnic. Eleven years ago this day, on the same day of the week, was the picnic on our ground of the Lockeford Cornet Band, to which my dear husband went and took his death cold. Willie Calvin and Eddie were members of the Band and attended in uniform. It seems but a year or two since then, but O what changes have taken place. Received a letter from Willie and wrote to the children in the East. (T.S.R. 47. 2 P.M. 78. S.S. 60.)

May 1. Sabbath. We had a welcome rain in the early morning, and almost a quarter of an inch fell. Dear Lord, send us another such shower soon. The funeral of Mary, daughter of Michael Farley, seventeen years old, was attended from the Catholic Church. The poor girl was demented, and once set fire to her father's barn full of hay, and all a was burned. She died of some wasting disease. Rev. Patterson preached as usual this afternoon. Lucy called to see me. I seldom see her, and her visit was pleasant. Received a letter from Mother. (T.S.R. 47. 2 P.M. 70. S.S. 60.)

May 3. Tuesday. The "annual picnic" was held at Clements. All the people in the house went and left me alone for a while, but I enjoyed the loneliness more than they did their outing, I am sure. Howard Smith, Estelle Condy and Theresa went together, John, Hannah, Lizzie, Alice and Celeste went together - the boys George and Jim also went. All report that there were not so many people in attendance as usual, and the table very poor. I have written to Humboldt Co. children. (T.S.R. 45. 2 P.M. 77. S.S. 65.)

May 4. Wednesday. Eleven years ago today my dear husband was translated to the "echoless shore", leaving us to gaze after, sadly and longingly. O for a word, one word from him, without whom life seems imperfect. Probably now, I shall have not long to wait until our re-union, and to see Jesus, "whom having not seen, we love." Howard Smith and Estelle Condy departed. I have written to Ada. The weather is cool and Pleasant. (T.S.R. 47. 2 P.M. 78. S.S. 60.)