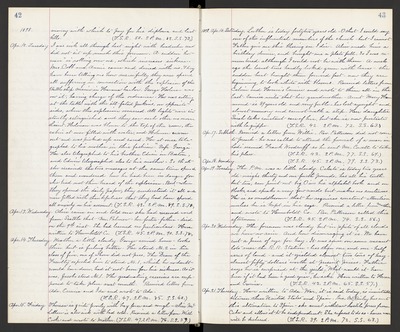 Apr. 12. Tuesday. I was sick all through last night with headache and did not sit up much this forenoon. A sudden 'hot wave" is rolling over us, which increases sickness. Mrs. Cobb and Annie came and dined with us. They have been telling us how mercifully they were spared all suffering in connection with the explosion of the Battleship maine in Havana harbor. George Holman was on it, having charge of the ordinance. He was sitting at the table with the ill-fated Jenkins, on opposite - sides, when the explosion occurred. All lights were instantly extinguished and they saw each other no more. Lieut. Holman was blown to the top of the room, the cabin at once filled with water, and Holman swam out and was picked up and saved. He at once telegraphed to his mother in this fashion. "Safe George". He also telegraphed to his brother Edwin in Boston, and Edwin telegraphed also to his mother. So that she received the two messages at the same time opened them and wondered how he had been in danger for she had not then heard of the explosion. But when they opened the daily paper, they understood it all and were filled with thankfulness that they had been spared all anxiety on his account. (T.S.R. 43. 2 P.M. 89. S.S. 78.)

Apr. 14. Thursday. Weather a little cloudy. George arrived home - looks thin but is feeling better. He stood No. 2 in his class of five, one of whom did not pass. The Dean of the Faculty expected him to stand No. 1, which he no doubt would have done, had it not been for his sickness. As it was, Jacobs stood No. 1. The graduating exercises are supposed to take place next month. Received letters from Ada, Eunice and Ida and wrote to Ada. (T.S.R. 47. 2 P.M. 85. S.S. 68.)

1898. Apr. 16. Saturday. Luther is today fortytwo years old - O that I could say one of the influential members of the church - but I cannot. Father give me this blessing en I die. Alice made him a birthday dinner, and brought me a plate full, So I was remembered although I could not be with them. A week ago the locust trees hardly looked green with leaves - the sudden heat brought them forward fast - now they are beginning to look white with blooms. Received letters from Calvin and Horace's Eunice and wrote to them all in the East. Eunice writes that her grandmother - Aunt Mary Hammond - is 89 years old and very feeble - has lost eyesight and almost memory and cannot walk a step. Her daughter Sarah takes constant care of her, but she is now prostrate with la grippe. (T.S.R. 42. 2 P.M. 72. S.S. 63.)

Apr. 19. Tuesday. The P.M. was a little cloudy. Celeste is today two years old weighs thirty and one-fourth pounds, has all his teeth but two, can point out big O in his alphabet book and on blocks, and speaks a very few words but makes no sentences. He is so meddlesome that he requires constant attention unless he is kept in his cage. Received a letter from mother and wrote to Humboldt Co. Rev. Patterson called this afternoon. (T.S.R. 45. 2 P.M. 74. S.S. 56.)

Apr. 20. Wednesday. The forenoon was cloudy but in spite of all clouds we have no rain. And how discouraging it is. We have cut a piece of rye for hay. It was sown on some vacant lots near the R.R. Station - less than one and one-half acres of land - and it yielded almost two tons of hay - almost fifty dollar's worth at present prices. Father says he is surprised at the yield. "What would it have been if it had been a good year," he asks. Have written to Horace and Eunice. (T.S.R. 42. 2 P.M. 65. S.S. 57.)

Apr. 21. Thursday. Have written to Ada. War, it is said today, is inevitable between these United States and Spain. Pres. McKinley has sent this ultimatum to Spain - she must withdraw hostile forces from Cuba and allow it to be independent. She refuses to do so - hence war will be declared. (T.S.R. 39. 2 P.M. 72. S.S. 63.)