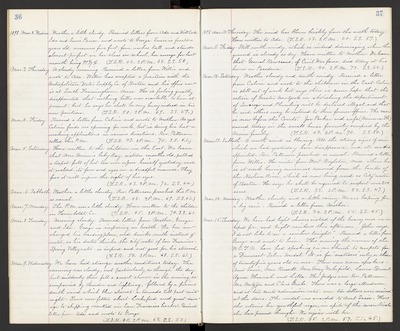 Mar. 3. Thursday. A cloudy morning. Received a letter from Willie and wrote to Ada. Willie has accepted a position with the Metropolitan Water Supply Co. of Boston and his office now is at South Framingham, Mass. He is feeling greatly disappointed that nothing better was available to him at present, but he says he shall be very busy indeed in his new position. (T.S.R. 50. 2 P.M. 69. S.S. 59.)

Mar. 4. Friday. Received a letter from Calvin and wrote to Mother. As yet Calvin finds no opening for work, but is doing his best in making applications in various directions. Rev. Patterson called this P.M. (T.S.R. 43. 2 P.M. 70. S.S. 63.)

Mar. 5. Saturday. Have written to the children in the East. We learn that Mrs. Miner's baby Roy, sixteen months old, pulled a teapot full of hot tea over upon himself yesterday, and it scalded its face and eyes in a dreadful manner. They fear it will injure the sight of his eyes. (T.S.R. 43. 2 P.M. 72. S.S. 64.)

Mar. 8. Tuesday. Morning cloudy. Received letters from Mother, George and Ida. George is improving in health. He has now changed his boarding place, and drinks milk instead of water, as his doctor thinks the city water of San Francisco. Spring Valley water is impure and not good for his stomach. (T.S.R. 50. 2 P.M. 68. S.S. 61.)

Mar. 9. Wednesday. We have had strange weather conditions today. The morning was cloudy, not particularly so through the day but suddenly there fell a smart shower in the evening accompanied by thunder and lightning, followed by a furious south wind which blew almost a tornado till past midnight, Trees were filled about Lockeford and great damage to shipping resulted in San Francisco harbor. Received letter from Ada and wrote to George. (T.S.R. 45. 2 P.M. 68. S.S. 53.)

Mar. 11. Friday. Still north windy, which is indeed discouraging when the ground is already so dry. Have written to Mother. We learn that General Rose crans, of Civil War fame, died today at his home in Pasadena (T.S.R. 40. 2 P.M. 72. S.S. 66.)

Mar. 12. Saturday. Weather cloudy and south windy. Received a letter from Calvin and wrote to the children in the East. Calvin is still out of work but says there is some hope that the action of Greater New York in abolishing the department of Sewerage and Plumbing will be declared illegal, and that he and others may be restored to their former offices. The case is now before the Courts. Joe Parker and wife (Minerva H.) moved today in the small house formerly occupied by the Miner family. (T.S.R. 43. 2 P.M. 70. S.S. 50.)

Mar. 13. Sabbath. A north wind is blowing. All the strong signs of rain which we had yesterday have disappeared, and all are disappointed. Rev. Patterson preached as usual. Received a letter from Willie. He writes from West Boylston, Mass, where he is at work having nuisances removed from the banks of the Nashua River, which is now being used as City water of Boston. He says he shall be required to inspect over 200 acres. (T.S.R. 33. 2 P.M. 52. S.S. 47.)

Mar. 15. Tuesday. We have had light showers instead of the heavy ones we so hoped for, and bright rainbows this afternoon. John says, "I do not like to see a rainbow tonight." Received a letter from George and wrote to him. This evening the women of the W.C.T.U. have had speaking in our church to compete for a Demorest Silver Medal. It is for "matrons" only, or those of twentyfive years old or over. There were seven speakers - Aunt Susie, Mrs. Russell, Mrs. May Wakefield, Laura Bruml Agnes, Hannah and Lilla. The Judges were Rev. Patterson, Mr. Metzger and Clara Grubs. There was a large attendance, and at ten cents admission rates, over ten dollars were received at the doors. The medal was awarded to Aunt Susie. How she retains her youthful vigor in spite of the severe trials she has passed through. We rejoice with her. (T.S.R. 35. 2 P.M. 57. S.S. 45.)