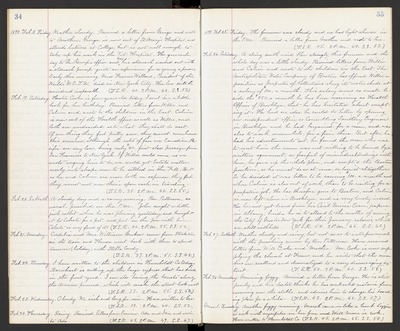 1898. Feb. 18. Friday. Weather cloudy. Received a letter from George and wrote to Mother. George is now out of St. Mary's Hospital, and attends lectures at College, but is not well enough to take up his work in the Vet. Hospital. He goes each day to Dr. Knorp's office and has his stomach washed out with a stomach pump-quite an experience for so young a person Early this morning, Miss Frances Willard, President of the World's W. C. T. U., died in New York City. Her loss will be considered irreparable. (T.S.R. 40. 2 P.M. 60. S.S. 53.)

Feb. 19. Saturday. Hester Cooke is four years old today. I sent her a little book for her birthday. Received letters from Willie and Calvin and wrote to the children in the East. Calvin is now out of the Health office as well as Willie, and both are undecided as to what they shall do next of one thing they feel pretty sure, they cannot come home this summer, although the rates of fare via Canadian Pacific are very low, being only $40. first-class passage from San Francisco to New York. If Willie could come, as we wrote urging him to do, we could get Estate matters easily into shape now to be settled in the Fall. But as he and Calvin are now both on expense, they feel they must not use their spare cash in traveling. (T.S.R. 35. 2 P.M. 60. S.S. 55.)

Feb. 22. Tuesday. I have written to the children in Humboldt Co. today, Barnhart is cutting up the large cypress that has died in the front yard. I am also having the locusts along the avenue pruned, which will make the street look neat. (T.S.R. 33. 2 P.M. 55. S.S. 50.)

Feb. 26. Saturday. A strong south wind blew strongly this forenoon and the whole day was a little cloudy. Received letters from Willie and Calvin and wrote to the children in the East. The Metropolitan Water Company of Boston has offered Willie a position as Inspector of Pollutions along its water sheds, at a salary of $100. a month. This salary seems so small beside the $250. a month he has been receiving as Health Officer of Brooklyn, that he has hesitated about accepting it. He had an idea he could do better by opening an independent office as Consulting Sanitary Engineer in Brooklyn and he had bargained for a room, and was also to work, meanwhile, for a firm there. But after he had his advertisements out, he found the man who was to rent him the room was not willing to be bound by a written agreement, so, fearful of misunderstandings with him, he gave up the whole plan, and accepted the Boston position, as he must do so at once, or lose it altogether. So he decided it was better to be earning $100. a month now when Calvin is also out of work, than to be waiting for a prospective job. He has therefore gone to Boston, and Calvin is now left alone in Brooklyn, and is very lonely indeed. He has not yet heard from his Civil Service Exam, papers in Albany, besides he is to attend to the matter of serving the City of Greater New York for their January salaries, which are still withheld. (T.S.R. 50. 2 P.M. 66. S.S. 60.)

Feb. 27. Sabbath. Weather cloudy and rainy, but not so as to interfere much with the preaching service by Rev. Patterson. Have received letters from Will Cooke and Mother. Mr. Cooke is now supplying the church at Fresno, and he writes that the members are scattered and demoralized to a very discouraging extent. (T.S.R. 50. 2 P.M. 60. S.S. 58.)

Feb. 28. Monday. Morning foggy. Received a letter from George. He is still poorly and his doctor thinks he has contracted malaria from roaming over the stables, and advises him to change his boarding place for a while. (T.S.R. 43. 2 P.M. 60. S.S. 57.)