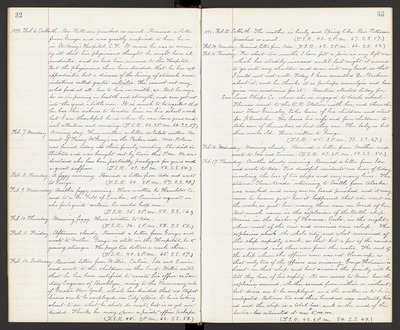 1898. Feb. 6. Sabbath. Rev. Patterson preached as usual. Received a letter from George and was greatly surprise to hear he is in St. Mary's Hospital, S.F. It seems he was so seriously ill that his physicians thought he might have appendicitis, and so had him removed to the Hospital. But the physicians there have decided that he has not appendicitis, but a disease of the lining of stomach and intestines called gastro-enteritis. He cannot eat any solid food at all has to live on milk, [?]. But he says he is improving in health and strength, and can get out into the yard a little now. It is much to be regretted that he has this sickness to hinder him in his school work but I am thankful he is where he can have good medical attention and nursing. (T.S.R. 50. 2 P.M. 64. S.S. 57.)

Feb. 7. Monday. A rainy day. Have written a letter on Estate matters. An aunt of Fanny McGary's on the Parker side. Mrs. Bolurs was buried today at their family cemetery. She died in Stockton and was brought out by train this P.M. We understand she has been partially paralyzed for years and a great sufferer. (T.S.R. 49. 2 P.M. 52. S.S. 50.)

Feb. 12. Received letters from Willie, Calvin, Ida and Eunice and wrote to the children in the East. Willie writes that he has been notified to vacate his office as Sanitary Engineer of Brooklyn, owing to the Tammany rule of Greater New York, which has decided that no Republicans are to be employed in City offices. So he is looking about to see what he shall do next, but is as yet undecided. Thinks he may open a private office perhaps. (T.S.R. 45. 2 P.M. 62. S.S. 58.)

Feb. 15. Tuesday. For about two months I have felt a pain in my left arm which has steadily increased until last night it seemed to go into my shoulder and even into my head, so that I could not rest well. Today I have consulted Dr. Barbour about it and he thinks it is perhaps neuralgia and has given me medicine for it. Mertice started today for San Luis Obispo Co. where she is engaged to teach school. Theresa went to the R.R. Station with her, and there she saw Tom Grimsley take leave of his children and start for Klondike. He leaves his wife and four children to take care of themselves, as best they can. The baby is but three weeks old. Have written to George. (T.S.R. 45. 2 P.M. 71. S.S. 67.)

Feb. 17. Thursday. Another cloudy morning. Received a letter from Ida and wrote to Ada. Two dreadful accidents we hear of today involving the loss of the ships and very many lives. The steamer "Clara Nevada" returning to Seattle from Alaska was wrecked and every one on board perished and it may never be known just how it happened that she went on the rocks, or just how many there were on board of her. But much worse is the explosion of the Battle-ship Maine in the harbor of Havana, Cuba, in the night, when most of the crew and marines were asleep. The explosion shook the whole city, and what remained of the ship rapidly sank, so that but a few of the wounded were rescued, and those were from the water. The end of the ship where the officers were was not blown up, so the only two of the officers are missing. George Holman is Lieut on that ship and how anxious the family will be till they hear of his safety. No one seems to know how the explosion occurred, whether caused from within or without, but divers are to be employed and the matter is to be investigated. Between two and three hundred were instantly killed and the ship is a total loss - sunk in the mud of the harbor - loss estimated at over $5,000.000. (T.S.R. 42. 2 P.M. 54. S.S. 49.)