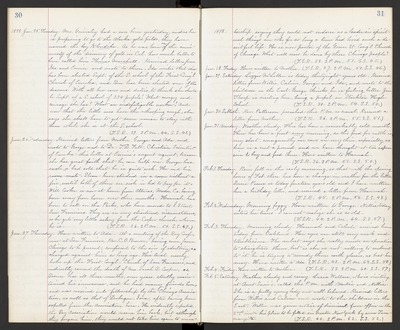 1898. Jan. 25. Tuesday. Mrs. Grimsley had a son born yesterday, and as he is preparing to go to the Alaska gold fields, they have named the boy Klondike. As he was born on the anniversary of the discovery of gold in Cal. how much better to have called him Thomas Marshall. Received letters from Ida and Eunice and wrote to them. Ida writes that she has been elected Supt. of the S. school of the First Cong'l Church of Eureka, and Ben has been elected one of the deacons. With all her cares and duties, to think she should be Supt. of a S. school of 234 pupils! What energy and courage she has! What an indefatigable worker! And now that the little ones have the whooping cough, she says she shall have to get some woman to stay with them while she is at the S. school. (T.S.R. 29. 2 P.M. 44. S.S. 41.)

Jan. 26. Wednesday. Received letters from Mother, George and Ada, and wrote to George and to Dr. T.D. Felt - Christian Scientist of Eureka - this latter at Eunice's urgent request, because she has great faith that he can help me. George has such a bad cold that he is quite sick. He and his room-mate-Sloan-have studied in a room without a fire, until both of them are sick in bed to pay for it. Will Cooke is now at home from Alturas, Modoc Co. having been away from home over three months. Hannah has been to call on the Perks, who have moved to I Street, San Francisco. They are in very straitened circumstances, as he gets very little salary from the Cooper church, where he is. (T.S.R. 26. 2 P.M. 50. S.S. 47.)

Jan. 27. Thursday. Have Written to Ada. At a meeting of the Bay Conference at San Francisco, Rev. C. O. Brown, having come from Chicago to be present, confessed to the sin of adultery, as charged against him so long ago. His trial nearly broke up the First Cong'l Church of San Francisco, and indirectly caused the death of Mrs. Sarah B. Cooper, as Brown has all these months, even years. stoutly maintained his innocence, and he had many friends here, and was received into fellowship by the Chicago Association, as well as that of Dubuque, Iowa, after having been expelled from the Association here. He evidently expected the Bay Association would receive him back, but although they forgave him, they would not take him again to membership,

Jan. 29. Saturday. Lizzie McLellan is today thirtyeight years old. Received letters from Willie, Calvin, George and Ida, and wrote to the children in the East. George thinks he is feeling better. Jim Thorp is visiting here, being a pupil in Stockton High School. (T.S.R. 30. 2 P.M. 54. S.S. 50.)

Jan. 31. Monday. Weather cloudy. This has been a remarkably cold month. There has been a frost every morning, so the feed for cattle is very short, consequently our cows are very thin, especially as bran is a cent a pound, and we have thought it too expensive to buy and feed them. Have written to Hannah. (T.S.R. 36. 2 P.M. 51. S.S. 50.)

Feb. 1. Tuesday. Rain fell in the early morning, so that with the opening hours of Feb, there has been a change in weather for the better. Susie Pascoe is today fourteen years old and I have written her a birthday letter, and received a letter from Hannah. (T.S.R. 45. 2 P.M. 56. S.S. 48.)

Feb. 3. Thursday. Morning cloudy. Hannah and Celeste arrived home today from Oakland. Her eyes are still very weak and troublesome. The oculist says she really needs an operation to straighten them, but as she is not willing to submit to it, he is trying to remedy them with glasses, as best he may. Have written to Ada. (T.S.R. 48. 2 P.M. 62. S.S. 52.)

Feb. 5. Saturday. Weather cloudy and rainy. Lucia Wallace, who is visiting at Aunt Susie's, called this P.M. with Mertice and Nettie. She is a pretty young lady and well-behaved. Received letters from Willie and Calvin and wrote to the children in the East. Willie was given notice of dismissal from office on the 2nd inst. his place to be filled in Greater New York by some Tammaryita (T.S.R. 40. 2 P.M. 62. S.S. 52.)