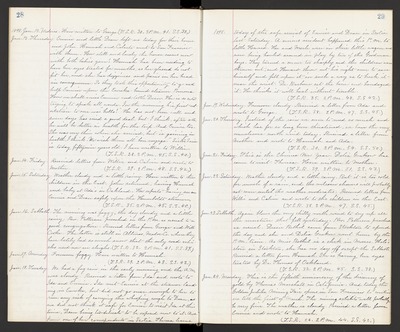 Jan. 13. Thursday. Eunice and little Dean left us today for their home and John, Hannah and Celeste went to San Francisco with them. How still and lonely the house seems now with both babies gone! Hannah has been needing to have her eyes treated for months, as her glasses do not fit her, and she has dizziness and pains in her head in consequence. So they took this opportunity to go and help Eunice upon the Eureka - bound steamer Pomona. How we shall miss Eunice and little Dean. He is so cute trying to speak all words. In the morning his first salutation to me was "hello!" He has not been well and some days has cried a good deal, but I think, after all he will be better in health for the trip. And Eunice too. She was very thin when she arrived. but is gaining in health, I think. We wish them all "bon voyage." Sister Susie is today fiftynine years old. I have written to Willie. (T.S.R. 28. 2 P.M. 45. S.S. 40.)

Jan. 15. Saturday. Weather cloudy and a little rainy. Have written to the children in the East. John returned, having Hannah and baby at Ada's in Oakland. He reports having see as Eunice and Dean safely upon the Humboldt steamer. (T.S.R. 35. 2 P.M. 45. S.S. 40.)

Jan. 16. Sabbath. The morning was foggy. the day cloudy and a little rainy. Rev. Patterson preached in the P.M. as usual to a good congregation. Received letters from George and Will Cooke. The letter is still in Alturas, Modoc Co. where they have lately had so much snow that the only road vehicles used now are sleighs. (T.S.R. 32. 2 P.M. 41. S.S. 39.)

Jan. 18. Tuesday. We had a fog rain in the early morning and the A.M. was cloudy. Received a letter from Ida and wrote to Ida and Eunice. Ida met Eunice at the steamer landing in Eureka, but did not go near enough to her to run any risk of carrying the whooping cough to Dean, as we did not think it safe for Eunice to visit Ida at this time, Dean being too delicate to be exposed now to it. And from one of her correspondents in Scotia. Theresa learns

1898. today of the safe arrival of Eunice and Dean in Scotia last Saturday. A serious accident happened this P.M. to little Howard. He and Merle were in their little wagon and were being hauled around in play by two of the Goodman boys. They turned a corner to sharply and the children were thrown out, and Howard throw out his right arm to save himself and fell upon it in such a way as to break it near the wrist. Dr. Barbour set the bone and bandaged it. He thinks it will heal without trouble. (T.S.R 35. 2 P.M. 48. S.S. 42.)

Jan. 20. Thursday. Instead of the rain we seem to need so much and which has for so long been threatened, we have the very unwelcome worth wind today. Received a letter from Mother and wrote to Hannah and Ada. (T.S.R 30. 2 P.M. 54. S.S. 50.)

Jan. 22. Saturday. Weather cloudy and a little rainy. But it is too cold for much of a rain, and the welcome showers will probably not come until the weather moderates. Received letters from Willie and Calvin and wrote to the children in the East. (T.S.R 38. 2 P.M. 47. S.S. 45.)

Jan. 23. Sabbath. Again blows the very chilly north wind to dry up all the moisture that fell yesterday. Rev. Patterson preached as usual. Dessie Bethel came from Stockton to spend the day and she and Delia Gnekow went home by the P.M. train. As miss Bethel is a clerk in Mosses. Hale's store in Stockton, she has no day off except the Sabbath. Received a letter from Hannah. She is having her eyes treated by Dr. Thomas of Oakland. (T.S.R 32. 2 P.M. 45. S.S. 38.)

Jan. 24. Monday. This is the fiftieth anniversary of the discovery of gold by Thomas Marshall in California. And today the Golden Jubilee Mining Fair opens in San Francisco to continue till the first of March. The mining exhibits will probably be very fine. The weather is cloudy. Received a letter from Eunice and wrote to Hannah. (T.S.R 26. 2 P.M. 44. S.S. 42.)