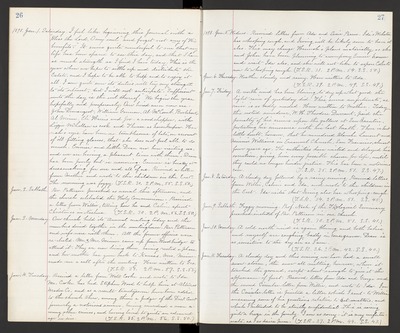 1898. Jan. 1. Saturday. I feel like beginning this Journal with a "Bless the Lord, O my soul" and forget not any of His benefits." It seems quite wonderful to me that my life has been spared to see this day, and that I have as much strength as I find I have today. This is the year when we hope to settle up and distribute the Estate, and I hope to be able to help and to enjoy it all. I am quite sure its duties will try my strength to its utmost, but I will not anticipate. Sufficient unto the day is the evil thereof. We begin the year hopefully and prosperously. Our hired men now are - John Dimangeot, William Gannon, Al McComb, Barnhart, Al Miner, Eli Harris and Joe - a woodchopper, with Lizzie McLellan as cook and Theresa as housekeeper. Hannah's eyes have been so troublesome of late, on account of ill-fitting glasses, that she does not feel able to do much. Eunice and little Dean are here visiting us, and we are having a pleasant time with them. Dean has been poorly but is recovering. Eunice is busy at dressmaking for one and all of us. Received a letter from Mother and wrote to the children in the East. The morning was foggy. (T.S.R. 30. 2 P.M. 55. S.S.50.)

Jan. 2. Sabbath. Rev. Patterson preached as usual this afternoon, and the church celebrated the Holy Communion. Received a letter from Willie, telling how he and Calvin spent Christmas in Nashua. (T.S.R. 30. 2 P.M. 56. S.S. 50.)

Jan. 3. Monday. Our church held its Annual meeting today and the members dined together in the meetinghouse. Rev. Patterson and wife were with them. All the former officers were re-elected. Mr. & Mrs. Minner came up from Woodbridge to attend it. They are now living there, having rented a place, and her mother has gone back to Kansas. Mrs. Minner made me a call after the meeting. Have written to Geo. (T.S.R. 33. 2 P.M. 57. S.S. 55.)

Jan. 4. Tuesday. Received a letter from Will Cooke and wrote the Ida. Mr. Cooke has had Stephen Wood to help him at Alturas Modoe Co. and as a result twentyseven have been added to the church there, among them a Judge of the Dist. Court formerly a notorious sinner, having murdered a man among other crimes, and having lived to quite an advanced age in sin. (T.S.R. 35. 2 P.M. 56. S.S. 50.)

1898. Jan. 5. Wednes. Received letters from Ada and Susie Pascoe. Ida's Webster has whooping cough, and Irving will be likely soon to have it also. This may change Hannah's plans materially as she and John have been planning to accompany Eunice house and visit Ida also, and she will not like to expose Celeste not to whooping cough. (T.S.R. 31 2 P.M. 49. S.S. 50.)

Jan. 7. Friday. A north wind has been blowing, to dry up what good the light rain of yesterday did. This seems unfortunate, as rain is so badly needed. Have written to Mother. Today the noted murderer, W.H. Theodore Durrant, paid the penalty of his crimes upon the gallows at San Isuntin, protesting his innocence with his last breath. There is but little doubt, however, that he murdered Blanche Lamont and Minnie Williams in Emanuel Church, San Francisco, almost four years ago. The authorities have waited and delayed his execution, giving him every possible chance for life, until they could no longer hinder justice. This has been notorious case. (T.S.R. 35. 2 P.M. 51. S.S. 47.)

Jan. 11. Tuesday. A cloudy day and this evening we have had a small snow-storm, the snow all melting, however, when it touched the ground, except about enough to give it the appearance of frost. Received letters from Ada and George and the second Circular letter from Willie, and wrote to Ida. In the Circular letter is printed a letter which I sent to Willie answering some of his questions relative to Est. matters, and which I intended to be strictly confidential. This is raising quite a breeze in the family. I am so sorry - it is very unfortunate, as I so desire peace. (T.S.R. 27. 2 P.M. 44. S.S. 43.)