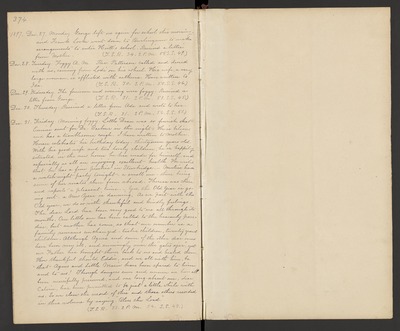 Dec. 31. Friday. Morning foggy. Little Dean was so feverish that Eunice sent for Dr. Barbour in the night. He is bilious and has a troublesome cough. I have written to Mother. Horace celebrates his birthday today - thirtyseven years old. With his good wife and two lovely children, he is happily situated in the new home he has made for himself, and especially as all are enjoying excellent health. He writes that he has a fine practice in Sturbridge. Mertice had a watch-night party tonight a small one there being some of her mates there from abroad. Theresa was there and reports a pleasant time. Yes, the Old Year is going out a New Year is dawning. As we part with the Old year, we do so with thankful and kindly feelings. The dear Lord has been very good to us all through its months. One little one has been called to the heavenly paradise, but another has come, so that our number as a family remains unchanged - twelve children, twenty grandchildren. Although Agnes and some of the other dear ones have been very ill, and seemingly near the "gates ajar", yet our Father has brought them back to us and healed them. How thankful should Eddie, and we all with him, be that Agnes and little Marie have been spared to him and to us! Through dangers seen and unseen we have all been mercifully preserved, and one long-absent one, dear Calvin, has been permitted to be just a little while with us. So we close the record of this and those others recorded in this volume by saying. "Bless the Lord." (T.S.R. 28. 2P.M. 54. S.S. 49.)