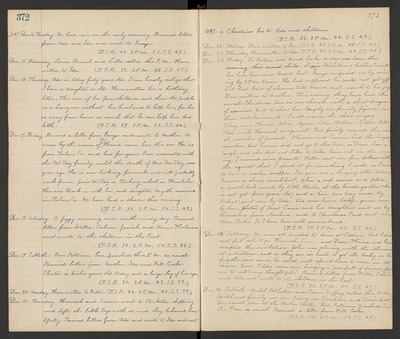 Dec. 16. Thursday. Ada is today forty years old. I can hardly realize that I have a daughter so old. Have written her a birthday letter. The care of her four children and three old people is a heavy one without her husband to help her, for he is sway from home so much that he can help her but little. (T.S.R. 29. 2 P.M. 52. S.S. 44.)

Dec. 17. Friday. Received a letter from George and wrote to Mother. A man by the name of Eli Harris came here this eve. He is from Tulan Co. and had for years bee associated with the McStay family, until the death of Mrs. McStay one year ago. He is now looking for work and will probably work for us. Josie McStay is teaching school in Honolulu. Her son Brock is with her, and daughter Myrtle married in Tulan Co. We have had a shower this evening. (T.S.R. 31. 2 P.M. 50. S.S. 43.)

Dec. 21. Tuesday. Hannah and Eunice went to Stockton shopping and left the little boys with us, and they behaved beautifully. Received letter from Ada and wrote to Ida and sent

Dec. 24. Friday. To Wallace and Mased Locke a son was born this morning - their second child. Lizzie McLellan's brother Everett has been here since Mond. last. George surprised us by arriving by 2 P.M. train. He had supposed he could not get off but had leave of absence till Mond. next, much to his joy. Have written to Mother. This evening, they have had the usual Christmas tree in our church, with a short program of exercises. Just to show how largely out family fiqures in these entertainments I will name the choir singers. They were Theresa, Alice, Agnes, Lilla, Wallace, Eddie, Nettie Rose, with Hannah as organist. Our family received the usual number of presents. Theresa and Eunice had the largest number, but Eunice did not go to the tree, as Dean has a cough and she did not like to take him out in the evening. I received nine presents. Willie sent me five dollars with the request that I spend it for something I need, so I am to have a woolen wrapper. Ida gave me a hanging letter holder, Eunice a China mush bowl, Alice a cup, saucer and plate, a needle book made by little Hester at the Kindergarten (she is not yet four years old) and a hair-pin tray made by Robert, sent me by Ada, Two nice linen hdkfs. given me by Lou, photos of Aunt Carie and her daughters sent me by themselves from Nashua, and a Christmas Card sent me Mrs. Perks. So I have been well remembered. (T.S.R. 30. 2 P.M. 47. S.S. 44.)

Dec. 25. Saturday. We were all invited to dine at Eddie's, but I did not feel able to go. Hannah, Eunice and Dean, Theresa and Geo. accepted the invitation. John was plowing with the other men at a distance, and as they are in haste to get the barley in before the rain comes, he could not spend time to come in. At dinner time, Eddie came over, bringing a pan full of dinner for me to eat, very thoughtful! Received letters from Willie, Calvin and Ada, and wrote to the children in the East. (T.S.R. 28. 2 P.M. 50. S.S. 47.)

Dec. 26. Sabbath. Mabel McIntire and Carrie Geffroy called this A.M. Mabel and family are now living in Stockton, and Carrie is at her usual place at the Woolen Mills. Rev. Patterson preached in the P.M. as usual. Received a letter from Will Cooke. (T.S.R. 32. 2 P.M. 52. S.S. 49.)