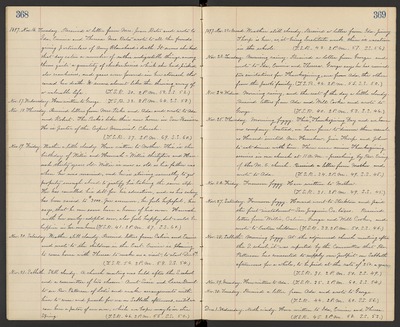 1897. Nov. 16. Tuesday. Received a letter from Mrs. Joan Bates and wrote to Ida, Eunice and Theresa. Mrs. Bates wrote to all the friends giving particulars of Amy Blanchard's death. It seems she had that day eaten a number of rather indigestible things, among them quite a quantity of checker berries which she hand picked, also cranberries, and gases were formed in her stomach that caused her death. It seems almost like the throwing away of a valuable life. (T.S.R. 30. 2 P.M. 58. S.S. 52.)

Nov. 19 Friday. Weather a little cloudy. Have written to Mother. This is the birthday of Willie and Hannah. Willie thirtytwo and Hannah thirty years old. Willie is now as old as his father was when he was married, and he is striving earnestly to get property enough ahead to justify his taking the same step. He has cancelled his debt for his education, and as his salary has been raised to $3000. per annum, he feels hopeful, he says, that he can soon have a home of his own. Hannah, with her newly-adopted son, also feels happy, but would be happier in her own home (T.S.R. 41. 2 P.M. 67. S.S. 60.)

Nov. 21. Sabbath. Still cloudy. A church meeting was held after the S. school and a committee of two chosen. Aunt Susie and Laura Brewel. to see Rev. Patterson of Lodi and awake arrangements with him to come and preach for us on Sabbath afternoons, until we can have a pastor of our own, which we hope may be in the spring. (T.S.R. 46. 2 P.M. 55. S.S. 50.)

Nov. 23. Tuesday. Mourning rainy. Received a letter from George and wrote to Ida, Eunice and Theresa. George says he has received two invitations for Thanksgiving, one from Ada, the other from the Jacob's family. (T.S.R. 46. 2 P.M. 55. S.S. 50.)

Nov. 25. Thursday. Morning foggy. This is Thanksgiving Day and we have no company. Instead, we have fewer to dinner than usual, as Howard invited Mr. Hunshaw, Jim Thorp and John to eat dinner with him. There were union Thanksgiving services in our church at 11 A.M. - preaching by Rev. Ewing of the M.E. church. Received a letter from mother and wrote to Ada. (T.S.R. 34. 2 P.M 49. S.S. 45.)