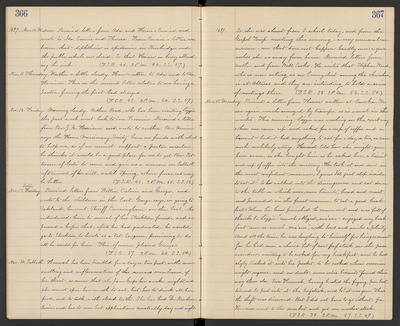 1897. Nov. 10. Wednes. Received letters from Ada an Horace's Eunice, and wrote to Ida, Eunice and Theresa. From Eunice's letter we learn that diphtheria is epidemic in Sturbridge and the public schools we closed. So that Horace is busy attending the sick. (T.S.R. 40. 2 P.M. 64. S.S. 57.)

Nov. 12. Friday. Morning cloudy. Arthur Read, who has been visiting Lizzie the past week, went back to San Francisco. Received a letter from Rev. J. K. Harrison and wrote to mother . Rev. Harrison says the Home Missionary Society Have no funds with which to help us, so if we cannot support a pastor ourselves. he thinks it would be a good plan for us to get Rev. Patterson or Lodi to come and give us a sermon on Sabbath afternoons, if he will, until spring, when finances may be better. (T.S.R. 43. 2 P.M. 65. S.S 56. )

Nov. 13 Satur. Received letters from Wille, Calvin and George, and wrote to the children in the East. George says, in going to Oakland, he met Sheriff Cunningham on the boat, who introduced him to several of his Stockton Friends, and expressed a hope that, after he had graduated, he would go to Stockton to locate as Vet. Sergeon, promising to do all he could for him. This, of course, pleased George. (T.S.R. 37. 2 P.M. 64. S.S. 54.)

Nov. 14. Sabbath. Hannah has been troubled, for a day or two past, with some swelling and inflammation of the mucous membranes of her throat, so severe that the pain keeps her awake nights, and she cannot open her mouth to eat, but has to drink all her food, and to talk with closed teeth. She has had Dr. Barbour twice, and has to use hot applications constantly, day and night.

1897. So she was absent from S. school today, and from the Gospel Temp. meeting this evening - a very unusual occurrence one that does not happen hardly once a year unless she is away from home. Received letters from mother and from Will Cooke. He writes that Stephen Wood, who is now acting as an Evangelist among the churches, is at Alturas, and they are intending to hold a series of meetings there. (T.S.R. 38. 2 P.M. 56. S.S. 50.)

Nov. 15. Monday. Received a letter from Theresa written at Eureka. We are again much annoyed by tramps, as is usual in the winter. This morning, Lizzie was washing in the court way when one came up and asked for a cup of coffee and a biscuit hadn't had anything to eat for a day or two, or some such unlikely story. Howard told her she might give him some, so she bought him as he asked her, a biscuit and cup of coffee into the courtway. He took it and said in the most confident manner, "I guess I'll just step inside to eat it". So he walked into the diningroom and sat down to the table on which were more biscuits, bread and meat, and proceeded in the fresh manner, to eat a good breakfast. When he had finished he came out and was full of thanks to Lizzie - "much obliged, ma'am - enjoyed my breakfast ever-so-much, ma'am," with bows and smiles a plenty. And all the time he was laughing to himself for being so smart for he had seen a choice bit of raw beef steak in the pass window, waiting to be cooked for my breakfast, and he had slyly tucked it into his pocket, to be cooked when occasion might require, and no doubt, some extra biscuits found their way there also. Soon Hannah, having heated the frying- pan hot, turned to put into it the beefsteak, and lo! it was gone. Thus the theft was discovered. But I did not have to go without, for Howard went to the market and got me another steak. (T.S.R. 30. 2 P.M. 57. S.S. 49.)