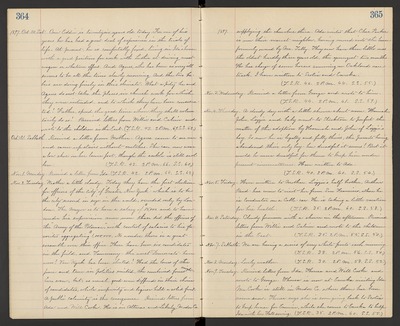 1897. Oct. 30. Sat. Our Eddie is twentysix years old today. For one of his years he has had a great deal of experience in the trials of life. At present, he is comfortably fixed, living in Ida's house with a good position for work with Luther at driving meat wagon or whatever offers. And Agnes, who has been so very ill seems to be all the time slowly recovering. And the two babies are doing finely in this climate. What a pity he and Agnes do not take she places in church work for which they were intended, and to which they have been consecrated! Father, speed the good time when they shall voluntarily do so! Received letters from Willie and Calvin and wrote to the children in the East. (T.S.R. 43. 2 P.M. 69. S.S. 62.)

Nov. 2. Tuesday. Weather a little cloudy. Today they have the first election for officers of the City of "Greater New York" - which is to be the city second in size in the world, exceeded only by London. The Mayor is to have a salary of $5,000 and to have under his supervision more men than did the officers of the "Army of the Potomac," with control of salaries to his favorites aggregating $1,000,000. No wonder there is a great scramble over this office. There have been six candidates in the field, and Tammany - the worst Democrats have won! Van Wyck has been elected! Had the lovers of the pure and true in politics united, the combined forces might have won, but, as usual, good men differed in their choice of candidates, while impurity and liquor held a solid front. A public calamity is the consequence. Received letters from Ada and Will Cooke. He is in Alturas and Likely, Modoc Co.

1897. supplying the churches there. Ada writes that Chas. Parker is now their nearest neighbor, having moved into the house formerly owned by Mr. Tally. They now have three little ones the oldest hardly three years old, the youngest two months. He has charge of some horses running on Oakland race track. I have written to Scotia and Eureka. (T.S.R. 46. 2 P.M. 64. S.S. 55.)

Nov. 4. Thursday. A cloudy day with a little shower about noon. Hannah, John, Lizzie and baby went to Stockton to perfect the matter of the adoption by Hannah and John of Lizzie's boy. So now he is legally and fully theirs, the parents having abandoned their only boy - how dreadful it seems! But it would be more dreadful for them to keep him under present circumstances. Have written to Ada. (T.S.R. 40. 2 P.M. 60. S.S. 54.)

Nov. 9. Tuesday. Received letters from Ida, Theresa and Will Cooke and wrote to George. Theresa is now at Eureka visiting Ida. Mr. Cooke is still in Modoc Co. Where then has been some snow. Theresa says she is soon going back to Scotia to keep house for Eunice, while she comes to Eureka to help Ida with her fall sewing. (T.S.R. 35. 2 P.M. 60. S.S. 55.)