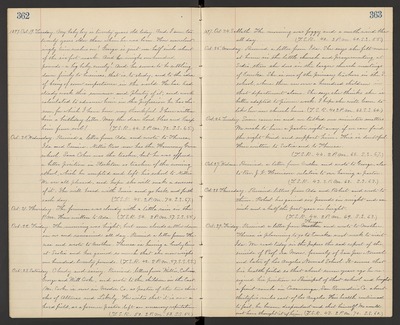 1897. Oct. 19. Tuesday. My baby boy is twenty years old today. And I am, too. twenty years older than when he was born. How unrelentingly time rushes on! George is just one-half inch short of the six foot mark. And he weighs one hundred pounds - a big baby, surely! And he seems to be settling down finely to business, that is, to study, and to the idea of being of some importance in the world. He has had steady work this summer and plenty of it, and work calculated to advance him in the profession he has chosen, for which I have been very thankful. I have written him a birthday letter. May the dear Lord bless and keep him from evil! (T.S.R. 44. 2 P.M. 72. S.S. 65.)

Oct. 20. Wednesday. Received a letter from Ada and wrote to Theresa, Ida and Eunice. Nettie Ross now has the Harmony Grave school. Sam Cohn was the teacher, but he was offered a better position in Stockton as teacher of the evening school, which he accepted and left his school to Nettie. We are all pleased, and hope she will make a success of it. She will board with Susie and go back and forth each day. (T.S.R. 45. 2 P.M. 74. S.S. 67.)

Oct. 22. Friday. The morning was bright, but soon clouds settled down on us and remained all day. Received a letter from Theresa and wrote to Mother. Theresa is having a lovely time at Scotia and has gained so much that she now weighs one hundred twenty pounds. (T.S.R. 42. 2 P.M. 57. S.S. 55.)

Oct. 23. Saturday. Cloudy and rainy. Received letters from Willie, Calvin. George and Will Cooke, and wrote to the children in the East. Mr. Cooke is now in Modoc Co. As pastor of the two churches of Alturas and Likely. He writes that it is now a hard field, as a former pastor left an unsavory reputation. (T.S.R. 50. 2 P.M. 53. S.S. 51.)

Oct. 25. Monday. Received a letter from Ida. She says she felt more at home in the little church and prayermeeting at Scotia, than she does in the larger church meetings of Eureka. She is one of the primary teachers in the S. school, where there an over a hundred children in that department alone. She says she thinks she is better adapted to pioneer work. I hope she will learn to like her new church home. (T.S.R. 40. 2 P.M. 68. S.S. 64.)

Oct. 29. Friday. Received a letter from Theresa and wrote to Mother. Theresa is planning to go to Eureka next week to visit Ida. We read today in the papers the sad report of the suicide of Prof. Ira More, formerly of San Jose Normal and later of Los Angeles Normal School. It seems that his health failed so that about seven years ago he resigned his position as Principal of that school and bought a fruit ranch in Cucamonga, San Bernardino Co. about Thirtyfive miles east of Los Angeles. His health continued to fail, he became despondent and shot himself. We would not have thought it of him. (T.S.R. 43. 2 P.M. 70. S.S. 60.)