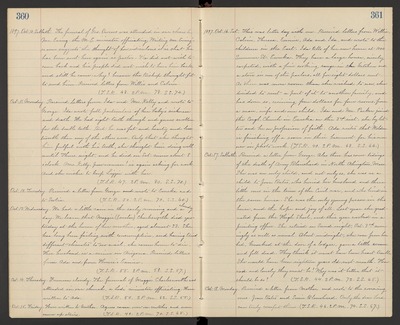 1897. Oct. 10. Sabbath The funeral of Geo. Owens was attended in our church, Mr. Ewing - the M.E. minister officiating. Writing Mr. Ewing's name suggests the thought of how ridiculous it is that he has been sent here again as pastor. He did not wish to come back and his people did not wish to have him back and still he came why? because the Bishop thought fit to send him. Received letters from Willie and Calvin. (T.S.R. 48. 2 P.M. 78. S.S. 74.)

Oct. 11. Monday. Received letters from Ida and Mr. Kelly and wrote to George. Ida wrote full particulars of her baby's sickness and death. He had eight teeth through and gums swollen for the double teeth. But he was fat and hearty and less trouble than any of the others were. Only that she thought him futful with his teeth, she thought him doing well until Thurs. night, and he died on Sat. morn about 8 o'clock. Mrs. Kelly, poor woman! is again asking for work. And she wishes to keep Lizzie with her. (T.S.R. 47. 2P.M. 80. S.S. 70.)

Oct. 13. Wednesday. We had a little rain in the early morning and a cloudy day. We learn that Maggie (Emslie) Charlesworth died yesterday at the home of her mother, aged almost 33. She has long been failing with consumption, and having tried different climates to no avail, she came home to die. Her husband is a miner in Arizona. Received letters from Ada and from Horace's Eunice. (T.S.R. 55. 2 P.M. 58. S.S. 57.)

1897. Oct. 16. Sat. This was letter day with me. Received letters from Willie, Calvin, Theresa, Eunice, Ada and Ida, and wrote to the children in the East. Ida tells of her new home at 1004 Summer St. Eureka. They have a large house. nicely carpeted, with a fine cooking range in the kitchen and a stove in one of the paclors, all for eight dollars rent. As there was, more room than she wished to use, she decided to rent a part of it to another family, and has done so, receiving four dollars for four rooms, from a man, wife and one child. Ida and Mr. Parker joined the Congl. Church in Eureka on the 3rd inst. she by letter and he on profession of faith. Ada writes that Weldon is finishing off a room in their basement for his own uses in photo work. (T.S.R. 40. 2 P.M. 68. S.S. 64.)

Oct. 17. Sabbath. Received a letter from George. Also there has come tidings of the death of Amy Blanchard in North Abington, Mess. She was an only child, and not only so, she was as a child to Joan Bates, who buried her husband and three little ones in the time of the Civil war, and who lived in the same house. She was the only young person in the house, and the hope and joy of all. Last year she graduated from the High School, and this year worked in a printing office. She retired on Sund. night, Oct. 3rd seemingly as well as usual. About midnight, she rose from her bed, knocked at the door of a lodger, gave a little scream and fell dead. They think it must have been heart trouble. She would have been eighteen years old next month. How sad and lonely. they must be! Why was it better that it should be so? (T.S.R. 44. 2 P.M. 72. S.S. 65.)