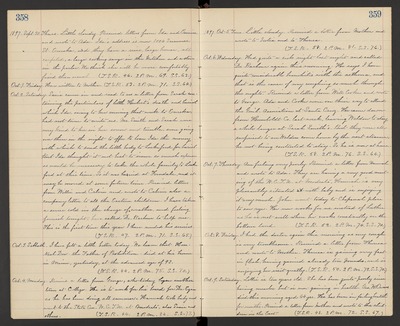 Oct. 2. Saturday. Susie came in and read to us a letter from Sarah containing the particulars of little Hubert's death and burial which Ida, owning to her moving that week to Eureka had not time to write us. Mr. Smith and Sarah were very kind to her in her sorrow and trouble, even going over there in the night to offer to loan Ida the money with which to send the little body to Lockeford for burial. But Ida thought it not best to incur so much expense as would be necessary to take the whole family to Lockeford at this time. So it was buried at Ferndale, and it may be moved at some future time. Received letters from Willie and Calvin and wrote to Calvin also a company letter to all the Eastern children. I have taken a severe cold in the change of weather, and feeling feverish tonight, have called Dr. Barbour to help me. This is the first time this year I have needed his services. (T.S.R. 47. 2 P.M. 71. S.S. 65.)

Oct. 6. Wednesday. Had quite a sick night last night and called Dr. Barbour again this morning. He says I have quite considerable bronchitis with the asthma, and that is the cause of my coughing so much through the nights. Received a letter from Will Cooke and wrote to George. Ada and Cooke were on their way to attend the Gen'l. Association at Santa Cruz. He came down from Humboldt Co. Last week, leaving Weldon to stay a while longer at Sarah Smith's. But they were all surprised to see Weldon come home by the next steamer, he not beng contented to stay. So he is now at home. (T.S.R. 58. 2 P.M. 76. S.S. 64.)

Oct. 7. Thursday. Am feeling very poorly. Received a letter from Hannah and wrote to Ada. They are having a very good meeting of the W.C.T.W. at Modesto, Hannah is very pleasantly situated with baby and is enjoying it very much. John went today to Chaparral place to saw rye. He now works for us instead of Luther as he is not well when he works constantly on the bottom land. (T.S.R. 52. 2 P.M. 74. S.S. 70.)

Oct. 8. Friday. I had the doctor again this morning as my cough is very troublesome. Received a letter from Theresa and wrote to Mother. Theresa is gaining very fast in flash, having gained already ten pounds, and is enjoying her visit greatly. (T.S.R. 50. 2 P.M. 78. S.S. 70.)

Oct. 9. Saturday. Lottie is ten years old. She has been quite poorly since having measles but is non gaining in health. Geo. W Owens died this morning aged 64 yrs. He has been in failing health for months. Received a letter from mother and wrote to the children in the East. (T.S.R. 48. 2 P.M. 72. S.S. 67.)