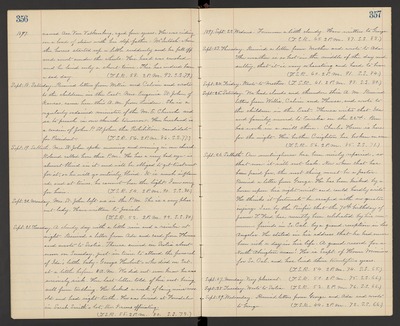 1897. named Asa Van Valkenburg, aged four years. He was riding on a load of straw with his step-father - McIntosh - when the horses started up a, little suddenly and he fell off and went under the wheels. His head was crushed and he lived only a short time. This has indeed been a sad day. (T.S.R. 58. 2 P.M. 93. S.S. 79.)

Sept. 18. Saturday. Received letters from Willie and Calvin and wrote to the children in the East. Mrs. Eugenia St. John, of Kansas, came here this A.M. from Linden. She is a regularly ordained minister of the M.E. Church and is to preach in our church tomorrow. Her husband is a cousin of John P. St. John, the Prohibition candidate for President. (T.S.R. 56. 2 P.M. 86. S.S. 77.)

Sept. 21. Tuesday. A cloudy day with a little rain and a rainbow at night. Received a letter from Ada and card from Theresa and wrote to Scotia. Theresa arrived in Scotia about noon on Sunday, just in time to attend the funeral of Ida's little baby - George Hubert. Who died on Sat. at a little before 8 A.M. We did not even know he was seriously sick. Her last letter told of his not being well from teething. He lacked a week of having nine mos. old and had right teeth. He was buried at Ferndale in Sarah Smith's lot, Rev. Parsons officiating. (T.S.R. 55. 2 P.M. 80. S.S. 73.)

Sept. 25. Saturday. We had clouds and thunder this A.M. Received letters from Willie, Calvin and Theresa, and wrote to the children in the East. Theresa writes that Ida and family moved to Eureka on the 22nd. Ben has work in a mill there. Charles Ham is here for the night. His brother Creighton has broken an arm. (T.S.R. 56. 2 P.M. 85. S.S. 71.)

Sept. 26. Sabbath. Our meetinghouse has been nicely repaired, so that now it will not leak. Now when that has been paid for, the next thing must be a pastor. Received a letter from George. He has been kicked by a horse upon his right wrist and could hardly write. He thinks it fortunate he escaped with no greater injury. I see by the Pacific that the 70th birthday of James T. Ford has recently been celebrated by his numerous friends in So. Cal. by a grand, reception in Los Angelos. He stated in his address that he had never been sick a day in his life. A grand record for a North Abington man! He is Supt. of Home Missions for So. Cal. and has lived there twentytwo years. (T.S.R. 54. 2 P.M. 74. S.S. 65.)