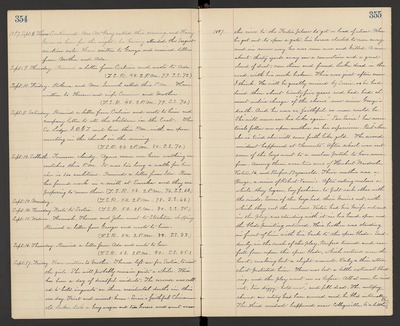 1897. Sept. 8. Continued. Mrs. McGary called this evening, and Harry Greve is here for the night, he having attended the Sargent auction sale. Have written to George and received letters from Mother and Ada.

Sept. 12. Sabbath. Forenoon cloudy. Agnes came over here walking on crutches this P.M. It was too long a walk for her she is too ambitious. Received a letter from Ida. Ben has found work in a mill at Eureka and they are proposing to move there. (T.S.R. 58. 2 P.M. 76. S.S. 68.)

Sept. 17. Friday. Have written to Mother. Theresa left us for Scotia, to visit the girls. She will probably remain quite a while. This has been a day of dreadful accidents. The coroner was called to hold inquests on three accidental deaths in this one day. First and nearest home - Susie's faithful Chinaman old Luke, took a hay wagon and two horses and went across

1897. the river to the Foster place to get a load of straw. When he got out to open a gate, his horses started to run away, and in some way he was run over and killed. A man about thirty yards away saw a commotion and a great cloud of dust, ran there and found Luke dead in the road, with his neck broken. This was just after noon I think. He will be greatly missed by Susie, as he had lived there about twenty five years and had had at most entire charge of "the chores" ever since George's death. And he was a faithful as man could be. She "will never see his like again." Poor Susie! how severe trials follow one upon another in her experience. But "when she is tried she will come forth like gold. The second accident happened at Clements. After school was out some of the boys went to a melon patch to have some fun. Among them were two sons of Hubert Wardrobe, Victor, 16, and Rufus, 13 years old. Their mother was a Breeze, a niece of Robert Vance's. After eating melons a while, they began, boy fashion to pelt each other with the rinds. Some of the boys had their knives out, with which they cut the melons. Victor had his knife out, and in the play, was standing with it in his hand, open and the blade pointing outward. His brother was standing in front of him with his back to the open blade. Suddenly, in the rush of the play, Rufus turned and ran full force upon the open blade, which entered near the heart, making but a slight wound. Only a thin cotton shirt protected him. There was but a little external bleeding, and the play went on as before. All at once, he cried out, "I-m dizzy - hold me," and fell dead. The autopsy showed an artery had been severed and he bled internally. The third accident happened near Collegeville, to a little boy