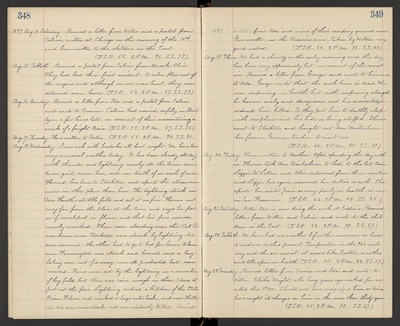 Aug. 16. Monday. Received a letter from Ida and a postal from Calvin and wrote to Eunice. Calvin had arrived safely in Brooklyn, a few hours late, on account of their encountering a wreck of a freight train. (T.S.R. 55. 2 P.M. 87. S.S. 75.)

Aug. 18. Wednesday. I was sick with headache all last night. We have had very unusual weather today. it has been cloudy all day with thunder and lightning nearly all the time, some times quite severe here, and one tenth of an inch of rain. Howard has been to Stockton and reports the storm more severe in other places than here. The lightning struck in Mrs. Heath's stubble field and set it on fire. He was not very far from the place at the time and says he felt as if enveloped in flame, and that his face seemed nearly scorched. Three men standing near the Oil Co's warehouse near Stockton were struck by lightning - two soon recovered the other had to go to bed for hours. A barn near Farmington was struck and burned and a haybaking crew, not far away, were all frustrated but soon recovered. Fires were set by the lightning in a number of hay fields, but there was rain enough in those places to put out the fires. Lightning entered a kitchen of the State's Prison, Folsom, and wrecked a large water boiler, and near Hollister, two men were struck and one instantly killed. Received

Aug. 19. Thurs. We had a showery in the early morning and the day has been very oppressively hot, on account of the moist air. Received a letter from George and wrote to him and to Ada. George writes that the sick lion is dead. He was improving in health but with improving strength he became surly and dangerous, and his owners Adgie - ordered him killed. So they put him to deathly sleep with morphine and his hide is being stuffed. Theresa went to Stockton and brought out Mrs. Winterburn her former German teacher to visit us. (T.S.R. 64. 2 P.M. 95. S.S. 89.)

Aug. 20. Friday. Have written to Mother. After spending the day with us, Theresa took Mrs. Winterburn to Lodi to the late train. Lizzie McLellan and Alice returned from their vacation and Lizzie has again resumed her duties as cook. She reports her sister Josie as very poorly in health is now in San Francisco. (T.S.R. 66. 2 P.M. 98. S.S. 85.)

Aug. 23. Monday. Received letters from Eunice and Ida and wrote to Willie. Elisha Wright, who long years ago worked for us, called this P.M. Should not have recognized him, as time has wrought its changes on him in the more than thirty years. (T.S.R. 65. 2 P.M. 98. S.S. 87.)