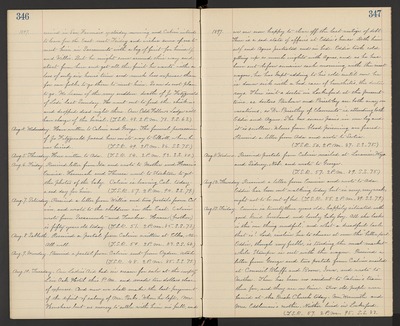 1897. arrived in San Francisco yesterday morning and Calvin intends to leave for the East next Friday and wishes some of us to meet him in Sacramento with a bag of fruit for himself and Willie. But he might come around this way and start from here and get all the fruit he wants, with a loss of only six hours time and much less expenses than for our folks to go there to meet him. So we do not plan to go. We learn of the very sudden death of Jo Fitzgerald of Lodi last Sunday. He went out to feed the chickens and dropped dead right there. Our Odd Fellows Lodge will have charge of the burial. (T.S.R. 48. 2 P.M. 78. S.S. 63.)

Aug. 7. Saturday. Received a letter from Willie and two postals from Calvin, and wrote to the children in the East. Calvin wrote from Sacramento and Truckee. Horace (brother) is fifty years old today. (T.S.R. 51. 2 P.M. 85. S.S. 73.)

Aug. 10. Tuesday. Our Ladies Aid had ice cream for sale at the empty Live Oak Hotel this P.M. and made ten dollars clear of expenses. And now we shall make the last payment of the deficit of salary of Mr. Perks. Where he left. Mr. Henshaw lent us money to settle with him in full, and

1897. we are now happy to clear off the last vestige of debt. There is a sad state of affairs at Eddie's house. Both him self and Agnes protrated and in bed. Eddie took cold getting up so much nights with Agnes, and as he has been out before sunrise each morning with the meat wagon, he has kept adding to his cold until now he is down sick with a bad case of bronchitis, the doctor says. There isn't doctor in Lockeford at the present time, as doctors Barbour and Priestley are both away on vacations, so Dr. Priestley of Clements is attending both Eddie and Agnes. She has severe pains in one leg and it is swollen. Ulcers from blood poisoning are feared. Received a letter from Ada and wrote to Scotia. (T.S.R. 50. 2 P.M. 87. S.S. 75.)

Aug. 13. Friday. Eunice is twenty three years old, happily situated with good, kind husband and lovely baby boy. All she lacks is the "one thing needful," and what a dreadful lack that is! Lord, incline her to choose at once the "better part." Eddie, though very feeble, is tending the meat market while Stamper is out with the wagon. Received a letter from George and two postals from Calvin mailed at Council Bluffs and Boone, Iowa, and wrote to Mother. There has been no accident to Calvin's train thus far, and they are on time. Two old people were buried at the Brick Church today Mr. Wermuth and Mrs. Eddleman's mother. Neither lived in Lockeford. (T.S.R. 57. 2 P.M. 95. S.S. 83.)