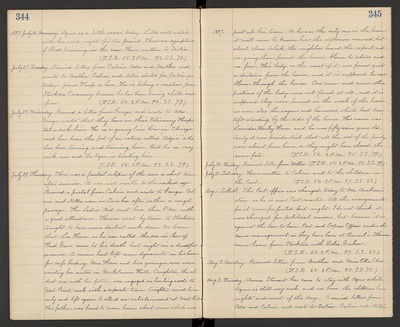 July 27. Tuesday. Received letters from Calvin, Ada and Mother and wrote to Mother Calvin and Nellie Started for Scotia yesterday. James Thorp is here. He is taking a vacation from Stockton Creamery because he has been having chills and fever. (T.S.R. 54. 2 P.M. 94. S.S. 79.)

July 28. Wednesday. Received a letter from George and wrote to Ada. George writes that they have in their Veterinary Hospital a sick lion. He is a young lion born in Chicago and has been the pet of an actress called "Adgie" who has been taming and training him. But he is very sick now and Dr. Egan is treating him. (T.S.R. 55. 2 P.M. 93. S.S. 79.)

July 29. Thursday. There was a partial eclipse of the sun a short time after sunrise. It was not visible to the naked eye. Received a postal from Calvin and wrote to George. Calvin and Nellie were in Eureka after rather a rough passage. The Ladies Aid met here this P.M. with a good attendance. Theresa went by train to Stockton tonight to have some dentist work done. We learn that Lee Ham, as he was called, the son-in-law of Fred Greve came to his death last night in a dreadful manner. A miner had left some dynamite in his house for safe keeping. Mrs. Ham and two younger sons were visiting her sisters in Mokelumne Hill. Creighton, the eldest son with his father, were engaged in hauling and to West Point, each with a separate team. Creighton arrived home early and left again to attend an entertainment at West Point. His father was heard to come home about nine o'clock and

1897. put up his team. As he was the only one in the house it will never be known how the explosion occurred but about eleven o'clock the neighbors heard the report, and on going there, found the house blown to atoms and on fire. His body, or the most of it, was found quite a distance from the house and it is supposed he was blown through the house. One arm and some other portions of the body were not found at all, and it is supposed they were burned in the wreck of the house as were also the wagons and harnesses, which had been left standing by the side of the house. His name was Leonidas Burley Ham, and he was fiftynine years old. Surely it was providential that all the rest of the family were absent from home, or they might have shared the same fate. (T.S.R. 56. 2 P.M. 95. S.S. 79.)

Aug. 1 Sabbath. The Post office was changed today to Mr. Ambrose's store, as he is now Post master. Al the arrangements for it were perfected last night. I do not think it was changed for political reasons, but because it is against the law to have Post and Express Offices under the same management, as they have been at Bruml's. Theresa same home from Stockton with Delia Gnekow. (T.S.R. 60. 2 P.M. 97. S.S. 83.)

Aug. 3. Tuesday. Anna Stewart has come to stay with Agnes awhile. Agnes is still very sick and we have the children here nights and most of the days. Received letters from Ada and Calvin and wrote to Scotia. Calvin and Nellie