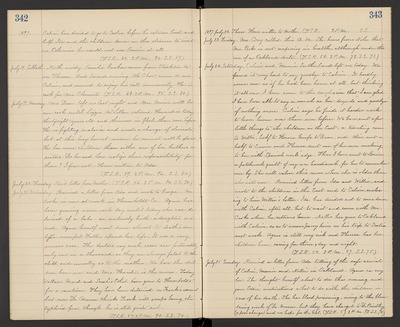 July 19. Monday. Mrs. Dean Left us last night and Mrs. Miner will be our cook until Lizzie McLellan returns. Howard is today thirtyeight years old and thinner in flesh than ever before. He is fighting malaria and needs a change of climate, but at this busy harvest season he cannot well be spared. He has more children than either one of his brothers or sisters. Do he and Lou realize their responsibility for them? I fear not. Have written to Ada. (T.S.R. 59. 2 P.M. 96. S.S. 80.)

July 21. Wednesday. Received a letter from Ada and wrote to George. Mr. Cooke is now at work in Humboldt Co. Agnes has been growing worse each day until today she was delivered of a babe - an untimely birth - a daughter and dead. Agnes herself went down almost to death's door but merciful Father spared her life. It was a very serious case. The doctors say such cases are fortunately only one in a thousand, as they an always fatal to the child and usually so to the mother. We have the children here now and Mrs. Hunter is the nurse. Today Wallow, Maud and Sarah's Ethel have gone to Humboldt for a vacation. They have been detained on Frank's account but now Dr. Mason thinks Frank will escape having the typhoid fever, though he is still quite sick. (T.S.R. 57. 2 P.M. 90. S.S. 74.)

July 24. Saturday. Calvin and Mannie Sutherland left us today. We found it very hard to say goodbye to Calvin. It hardly seems non as if he had been home at all, but thinking it all over, I have come to the conclusion that I am glad I have been able to say as much as "how do ye do" and "goodbye" if nothing more. Calvin says he finds it harder work to leave home now than ever before. We have sent a few little things to the children in the East, a traveling case to Willie, hakf. to Horace, knife to Dean, and Alice sent a hakf. to Eunice and Theresa sent one of her own making to her, with "Spanish work" edge. Then I have sent to Louise a patchwork guilt of my own handiwork, for her to remember me by. She will value this more when she is older than she will now. Received letters from Ida and Willie, and wrote to the children in the East and to Calvin, enclosing to him Willie's letter. Ida has decided not to come down with Calvin, after all, but to wait and come with Mr. Cooke when he returns home. Nellie has gone to Oakland with Calvin, so as to accompany him on his trip to Scotia next week. Agnes is still very sick and Theresa has her children here, caring for them, day and night. (T.S.R. 52. 2 P.M. 87. S.S. 75.)

July 25 Sunday. Received a letter from Ada telling of the safe arrival of Calvin, Mannie and Nellie in Oakland. Agnes is very low. She thought herself about to die this evening and gave Eddie instructions what to do with the children in case of her death. She has blood poisoning, owing to the blundering work of Dr. Mason, but they have changed to Dr. Priestley (a poor charge) and we hope for the best. (T.S.R. 57. 2 P.M. 93. S.S. 78.)