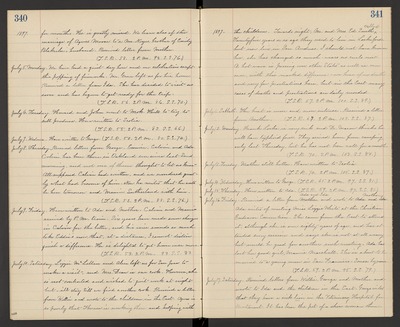 July 8. Thursday. Received letters from George, Eunice, Calvin and Ada. Calvin has been there in Oakland ever since last Sund. morning, and not one of them thought to let us know - All supposed Calvin had written, and we wondered greatly what had become of him. Now he writes that he will be here tomorrow and Mannie Sutherland with him. (T.S.R. 52. 2 P.M. 88. S.S. 76.)

July 9. Friday. Have written to Ada and Mother. Calvin and Mannie arrived by P.M. train. Six years have made some changes in Calvin for the better, and his voice sounds so much like Eddie's now, that, at a distance, I cannot distinguish a difference. He is delighted to get home once more. (T.S.R. 53. 2 P.M. 93. S.S. 83.)

July 10. Saturday. Lizzie McLellan and Alice left us for San Jose to make a visit, and Mrs. Dean is our cook. However, she is not contented and wished to quit work at night but will stay till we find another cook. Received a letter from Willie and wrote to the children in the East. Agnes is so poorly that Theresa is working there and helping with

1897. the children. Towards night, Mr. and Mrs. Ed. Smith called Twentyfive years or so ago they used to live in Lockeford. but now live in San Andreas. I should not have known her, she has changed so much wears no curls now. A hot wave is passing over other States as well as our own, with this marked difference we hear of no deaths and very few prostrations here, but in the East many cases of deaths and prostrations are daily recorded. (T.S.R. 57. 2 P.M. 100. S.S. 89.)

July 16. Friday. Received a letter from Ada and Ida and wrote to Mother. Ada writes of meeting Miss Lizzie White at the Christian Endeavor Convention. She came from the East to attend it, although she is over eighty years of age, and has at tended every session and says she is not at all weary but would be good for another such meeting. Ada has lost her good girl, Mannie Marshall. She is about to be married to a young man in San Francisco Sousa by name. (T.S.R. 59. 2 P.M. 95. S.S. 79.)

July 17. Saturday. Received letters from Willie, George and Mother and wrote to Ida and the children in the East. George writes that they have a sick lion in the Veterinary Hospital for treatment. It has been the pet of a show woman there.