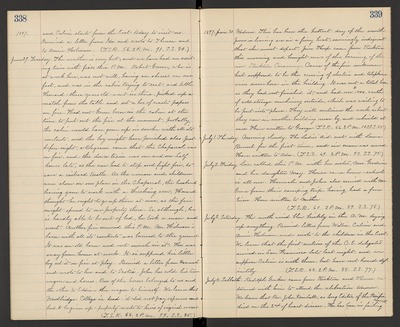 June 29. Tuesday. The weather is very hot, and we have had an exciting time with fries this P.M. Robert Green, who is at work here, was not well, having an abscess on one foot, and was in the cabin trying to rest, and little Howard three years old - went in there, picked up a match from the table and set a box of waste papers on fire. Had not Green been in the cabin at the time to put out the fire at the moment, probably the cabin would have gone up in smoke with all its contents, and the boy might have perished also. Just before night, a telegram came that the Chaparral was on fire, and the down train was one and one-half hours late, as the crew had to stop and fight fire, to save a railroad trestle. As the woman and children were alone on our place in the Chaparral, the husband having gone to work with a threshing crew, Howard thought he ought to go up there at once, as the fire might spread to our property these. So, although, he is hardly able to be out of bed, he took a man and went. Another fire occurred this P.M. Mr. Hilman's barn with all its contents was burned to the ground. It was an old barn and not much in it. He was away from home at work. It is supposed his little boy set-it on fire at play. Received a letter from Hannah and wrote to her and to Scotia. John has sold his team wagon and horses. One of the horses belonged to us and the other to Eddie - the wagon to himself. we learn that Woodbridge College is dead - it did not pay expenses and had to be given up - property reverts to heirs of original owners. (T.S.R. 66. 2 P.M. 99. S.S. 85.)

1897. June 30 Wednes. This has been the hottest day of the month. June is learning in a fiery heat, seemingly indignant that she must depart. Jim Thorp came from came from Stockton this morning and brought news of the burning of the new Stockton Creamery. Cause of the fire unknown but supposed to be the crossing of electric and telephone wires some here in the building. It was not a total loss, as they had not finished it, and had over $1000. worth of cold storage machinery outside, which was waiting to be put into place. They will continue the work as best they can in another building near by, and rebuild at once. Have written to George. (T.S.R. 66. 2 P.M. 103. S.S. 85.)

July 3. Saturday. The north arrived blew briskly in the A.M. drying up everything. Reserved letters from Willie, Calvin and Annie Holman, and wrote to the children in the East. We learn that the first section of the C.E. delegates arrived in San Francisco late last night, and we suppose Calvin is with them, but have not Heard definitely. (T.S.R. 62. 2 P.M. 88. S.S. 77.)

July 4. Sabbath. Rudolph Gnekow came from Stockton and Theresa returned with him to attend the celebration tomorrow. We learn that Rev. John Kimball, so long Editor of the Pacific, died on the 2nd of heart disease. He has been in failing